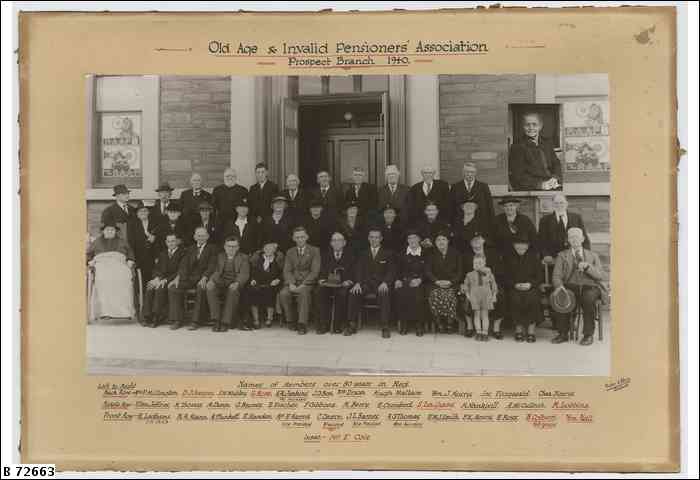 With no personal images  to share, I have selected this wonderful photo from State Library of South Australia which has the names of all those over the age of 80 years. It would be fantastic to find a photo like that so if you had relatives in the Prospect area ca 1940 have a close look. It is also a good reminder that our State Libraries have all kinds of photographs in them.

In Queensland Judy Webster has indexed old age pension records for 1908-1909 held at Queensland State Archives (in a number of series) and her website has some good background information on the introduction of the pension and relevant legislation. Judy’s index only gives a person’s name and no other identifying information but she does offer a copying service if you think someone is the person you are looking for.

If you do a search in ArchivesSearch for old age pension and select all of the words this will bring up other invalid and old age pension records including Magistrates Courts for Landsborough 1942-1968 and Thursday Island 1968-1976. If you do a broader search on just pensions, then there are more results which may be worth looking at.

While I was working at Public Record Office Victoria, we held an exhibition on North Melbourne and as part of that we indexed the Court of Petty Sessions Register of Applications for Victorian Old Age Pension North Melbourne 1902-1908. This index is online and can be accessed by PROVguide 23 which lists their online indexes and digitised records.  Fields in the North Melbourne old age pensions index include name, address, date of application, whether granted or not and the amount of pension. Not a lot of information but it does place people at an address and whether they were eligible for a pension.

The PROV series description for most of the series below is as follows:

This series documents the carrying out of responsibilities delegated to local Clerks of Courts under Commonwealth Invalid and Old Age Pensions Acts which began in 1908.

Local Clerks of Courts could be appointed under this Act to act as a Registrar of Pensions with the duties of receiving pension claims, investigating these claims and keeping appropriate records (Section 11). Claims, once investigated, were then to be referred to a Magistrate able to investigate further and eventually make a recommendation regarding the acceptability of the claim (Sections 30 and 31). The Registrar then had the duty of transmitting that recommendation with the Magistrates endorsement, to the Deputy Commissioner of Pensions.

As you can see the series description provides background information on how and why the records were created.  As well as North Melbourne, PROV also holds old age and invalid pension records (various series and agencies) for the following courts:

The records are not indexed and more detail is in the series and agency sheets – do an Access the collection search with the words old age pension and make sure you select the ‘all the words’ option. Depending on which agency you want, the records may be held at either the North Melbourne or the Ballarat office of PROV. The records are all open (except for Sebastopol) but you must either visit or engage someone else to look at the records for you.

As old age pension records became the responsibility of the Commonwealth Government, you can also find some records in the National Archives of Australia by doing the same search on old age pension in RecordSearch.  In some  instances individuals are named in the search results and a few files have been digitised, possibly when a copy has been requested by a relative.

You can do similar searches in other state archives using the term pension or more specifically old age pension. For example, there is a Register of Claims: Widows Pension Act for the Culcairn Court of Petty Sessions  which is held by Charles Sturt University Regional Archives (one of State Records NSW‘s regional repositories).

While not all records relating to old age pension records have survived, it may be worthwhile to have a look and see if there is anything relevant to an area that you are researching.