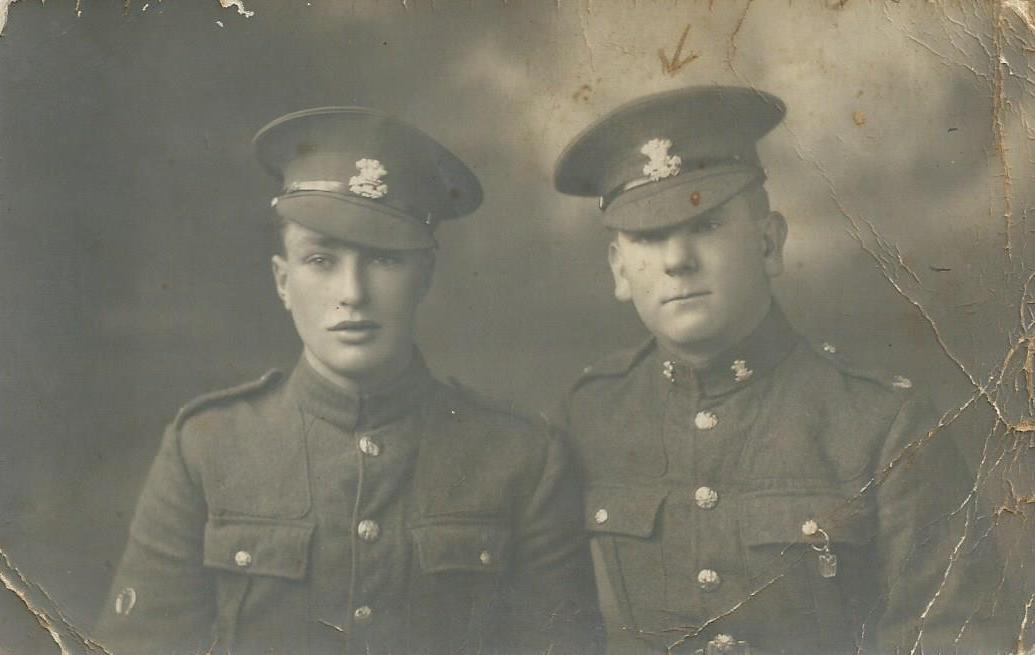 Week 30 Postcards in 52 Weeks of Genealogical Records in 2015

When we think of postcards these days, we tend to think of exotic places and a few scribbled words from a friend or family member saying they are having a fantastic time. Although these are probably fast being replaced by Facebook snaps and emails! 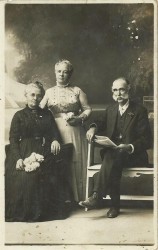 But in times past, postcards were treasured as they were a way of keeping in touch with distant family members. I have a few postcards in my family memorabilia and while they don’t often say much on the back, the front is a now a treasured photo of my ancestors. In this first example, the back has ‘To Geo (I think) from mother with love and as I know it is Thomas and Elizabeth Price, it was probably sent to their son George. But it ended up with my mother who was the daughter of Henry, George’s brother. Or perhaps it was not Geo but something else!

The other puzzling thing about this postcard is who is the woman with them in the light coloured clothing? Why would she be in a portrait photo with them? Is she family or just a friend? Elizabeth is wearing black and as she lost two daughters in 1910 and 1912 I am assuming it is around that date range. 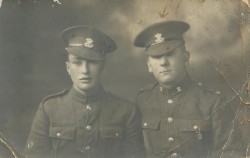 Mystery Jack on the right

Sometimes there is a message as in my next example – ‘Best love to dear Doris from Jack’ with an arrow pointing to one of the soldiers, obviously Jack. One of Mum’s aunts was Doris but who was Jack? But then Dad also had an aunt Doris and his father was John, known as Jack. However it does not look like my grandfather, so I am back to Mum’s side of the family in trying to identify Jack.

From the uniforms it is WW1 which fits better as Granddad Jack was WW2. But there is no John/Jack that fits into Mum’s side of the family. Was he just a friend to Doris White who would have been 13 years old at the start of WW1. Was he her first sweetheart, perhaps he didn’t come home? Or was he a next door neighbour? Identifying postcards with no dates or full names can be very frustrating.

The third item I will mention is an album put together by my grandfather Jack Gunderson during World War 2. He never served overseas but kept postcards of where he was during those years. Until recently I have never questioned this, simply believing what I was told when it was given to me years (decades) ago. Silly me and this is why we really should revisit all of our research at some time. We learn more as we go along.

I have been scanning family photos on a semi regular basis as a long term project and I took the album out to see if I should scan it or the postcards.  Imagine my surprise when I took a postcard out and turned it over. You guessed it – there was writing on the back for most of them.

It totally changed the provenance of the album. The postcards were sent to my grandmother from my grandfather and obviously she was the one who put them into the album. Some are dated and as they are roughly in chronological order, I am assuming (yes I know we shouldn’t) that she used the album as a way of keeping them until her husband came home.

There is one of Bondi Beach in Sydney and on the back he has written ‘Went there on Xmas Day, Jack’. Obviously not a romantic or perhaps the Army was censoring the mail! It is dated 29 Dec 1941. I am guessing not a romantic as another one is simply addressed ‘To my wife from Jack’. 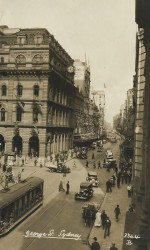 I was reluctant to take all the postcards out as the album is fragile but at least it has paper corners as opposed to postcards glued in. Today curiosity overtook me while writing this blog and I looked at all of them. Again my theory on the creation of the album was destroyed. There were also postcards from a Kevin and he had simply written ‘To Kathleen from Kevin’.  He was fairly easy to identify as my grandmother had a brother Kevin who also enlisted during WW2.

All of the postcards are scenic shots of Sydney, Newcastle, Maitland and Singleton and obviously they both spent time in those areas.  It is fascinating to see these areas as they were in the late 1930s or early 1940s. Some are not dated and some have no writing on them at all so who sent them is in doubt. But by relooking at this family album, I now have to follow up on more clues. Why was Kevin in Sydney and how long was my grandfather there?  Where were they based and what were they doing?

It has been a long time since I have looked at these images and with the first two I am asking the same questions that probably went through my mind back in the 1980s. Perhaps someone reading this will solve my mysteries! With the third example I have made new discoveries by simply taking all the postcards out of the album and looking to see what was written on the back, if anything.

Now that I have my postcards out and around me, I will take the time to scan them as a backup measure. Do you have any postcards in your family collections? Can they tell you anything new? Did you really look at them the first time and note all relevant clues? Have you done backup copies? Postcards for family history are definitely worth looking for.