Week 31 Photographs in 52 Weeks of Genealogical Records in 2015 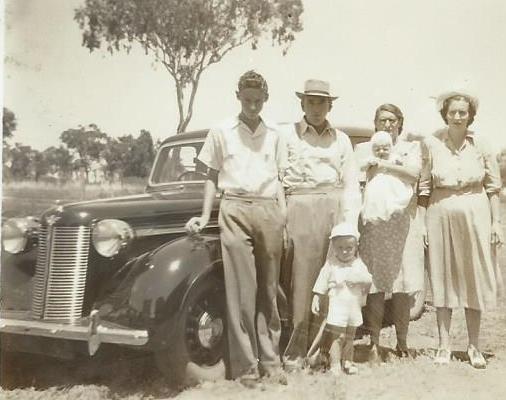 Are photographs genealogical records? Do they actually tell us any useful information other than giving us someone’s likeness or an image of where they lived? If someone has written on the back that can be very useful, especially if it tells us who, when and where. Sadly most of my photographs do not have anything written on them making identification difficult, if not impossible.

My view of interpreting photographs for genealogy changed after attending a talk by Colleen Fitzpatrick at the Adelaide AFFHO Congress in 2012. I was so impressed I even bought her book The Dead Horse Investigation: forensic photo analysis for everyone. It changed how I think of photographs for research.

When we look at a photograph, are we noting every detail? What is it telling us? In Colleen’s talk she showed various photos and then asked what did we see. Definitely not what she saw and pointed out to us during the talk.

This week’s topic is timely because Colleen is again returning to Australia and is a keynote speaker at AFFHO Congress 2015 in Canberra from 26-30 March. If you are already going to Congress, make sure you see at least one of Colleen’s three talks.

If not,  Colleen is giving talks elsewhere after Congress. The Genealogical Society of Queensland and the Queensland Family History Society are holding a joint seminar with Colleen in Brisbane on 18 April. She is giving three talks – details here. These are different talks from the three talks she is giving in Canberra so not to be missed and well worth driving a distance to hear Colleen.

Now that I don’t live in a capital city any more I do miss the easy opportunity to attend events like this but why not car pool and share the driving. If you are within a couple of hours drive of Brisbane I would definitely make the effort to hear Colleen talk. Having just written that, I realised I should also book my seat as I would hate to miss out.

Colleen is also talking in Canberra apart from Congress, Sydney, Melbourne and Adelaide and details of when and where are on the upcoming events page of her website Forensic Genealogy.

This has wandered a bit from what I had in mind when I started but Colleen’s visit is timely as I have been scanning old photos and re-looking at photo albums, mostly unidentified. She will inspire me to come home and keep going. 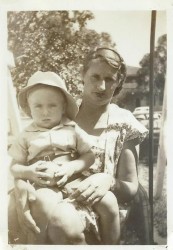 I have been re-looking at an early album of my grandmother’s and photos of my father as a child. There is nothing on the back of the photos and the album only surfaced after she died so no help with identification.  This photo shows a mystery boy with my grandmother Kathleen Gunderson nee Carnegie and the boy is probably 2-3 years old.

At first glance I thought it was my father as a young child but then I started looking at the boy in other photos in the album. This next photo is a group with I think the same boy in front. The young man on the far left looks exactly like my father in other photos that I have of him. The man standing next to him looks like his father Jack with Kathleen standing next to him holding a baby. Then there is an unknown woman at the end. 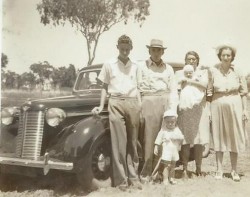 Who is the woman? Is she one of Kathleen’s sisters? Is she the mother of the two children? Why isn’t she holding her own baby? If the young man is my father, why are there so many photos of the young boy? Can I identify the car, will that give a clue to the date? So many questions.

No wonder it takes so long to scan and file images! One advantage of scanning is that you can then enlarge the photo, change the lighting to bring up features and use facial recognition software (Picasa) to try and group the same individuals together.

So that is my project for the next month, scan all the photos in this album and then see what clues I can discover from the images.  Stay tuned for a progress report. In the meantime, why not have another look at your own family photos and see if they have anything extra to tell you.