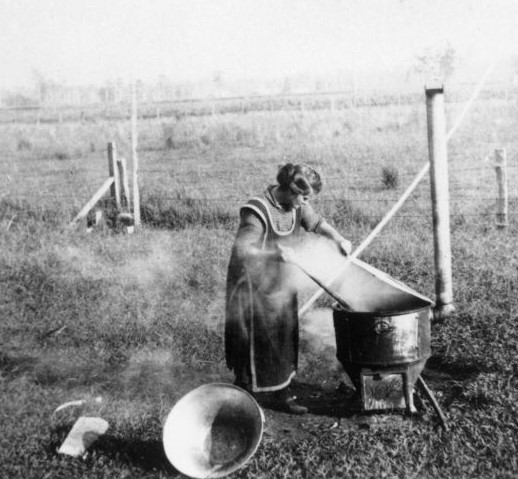 At the weekend while searching the British Newspaper Archive, I was shocked to discover that my 5X great grandmother Mary Hitchman, aged and infirm, died when she fell into the fireplace in 1809 in Oxfordshire, England. She was horrifically burned as it was some time before she was found. After a few days of what must have been agony, she passed away.

That was over 200 years ago and I know little more than the basic details about her life. My Facebook post detailing how sad I felt at this tragic end, led to many similar comments. Being burnt alive was a very real hazard for our female ancestors.

It is sometime since I last did a Trove Tuesday post, and probably time to highlight how dangerous it was for our female ancestors. Childbirth was a very common risk but so too was washing, cooking and just keeping the house warm.

On my son’s paternal side of the family, a female relative met her end in this accidental and tragic way in Gympie, Queensland.  This is her story for Trove Tuesday.  Oddly it was almost 100 years after the death of my 5X great grandmother.

The Brisbane Courier published a report of the accident on 28 November 1906 and simply referred to her as Mrs Jefferson. No mention that her name was Clara Beatrice although she was described as the eldest daughter of George Potter on the One Mile, Gympie.

Clara’s apron caught fire while she was doing the washing in a copper stand in the back yard. The wind blew a ‘tongue of flame’ out the side. Clara tried to take her apron off quickly but in her desperation, knotted it at the back. Her muslim dress then caught fire and her sister Rose Potter then tried to roll Clara in the grass. Instead Clara decided to run for the bathroom and turn the shower on. Rose then wrapped Clara in a quilt but she was terribly burned all over her body except for her face, head and chest. By this time other neighbours had arrived to help.

Clara was conscious and in a serious condition. She died the following day. Rose also suffered burns to her hands and arms as she tried to help Clara.

Never stop at just one article for any accident or tragedy. There was a much more detailed account in the Maryborough Chronicle, Wide Bay and Burnett Advertiser on 29 November 1906 after Clara had died. It reported that ‘Mrs Jefferson lingered till yesterday morning, being quite conscious and bearing up bravely to the last’.  Clara was well known in Maryborough as she had attended Maryborough Grammar School and sang in local concerts.

One can only imagine the fear and agony that Clara suffered. Poor Rose would have felt helplessness and guilt that she couldn’t save her sister. Their parents and other siblings would have been grief stricken. Clara’s husband of just three years, Frederick Jefferson would have been inconsolable. There were no children and perhaps that was the only good thing in that terrible accident.

I’m sure that many of us have female ancestors who lost their lives in this tragic way. The least we can do is tell their stories so that they can be remembered and not lost in the mists of time.

Discover more about the families I am researching here.