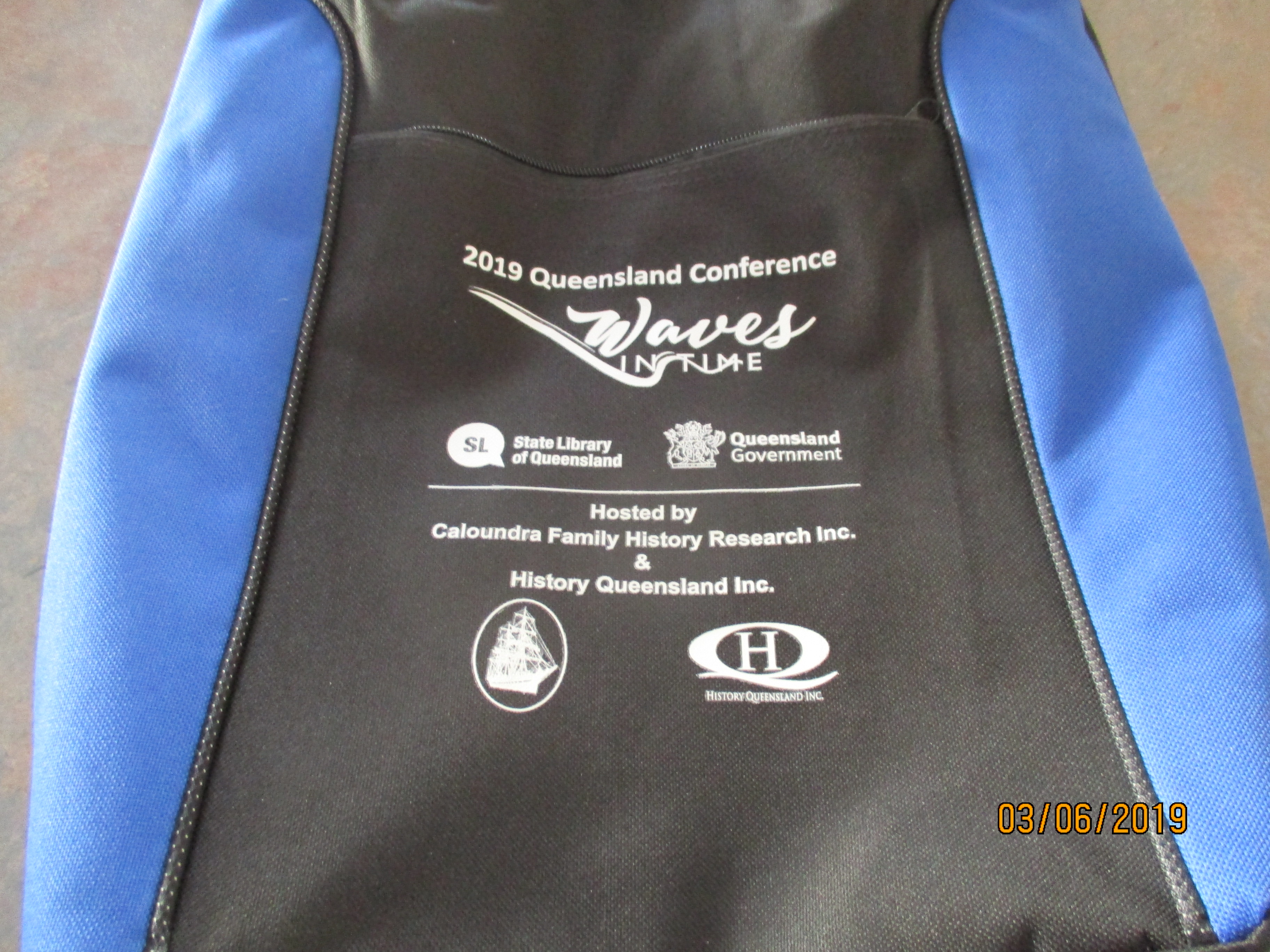 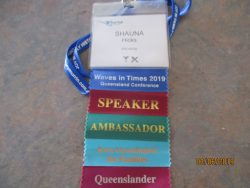 This is the second blog post on my attendance at the Waves in Time Conference on the Sunshine Coast in May 2019. Read Part 1 here. Part 2 looks at the Conference over Saturday and Sunday. With the exception of the Keynotes, there was a dual program on both days. This obviously meant having to decide which session to attend. However, all speakers were asked to provide a handout and this was given to attendees on a USB.

First keynote speaker was Dr Richard Reid (author of many Irish books) who spoke about the importance of personal family papers and the stories they tell. He also reminded me that I should should again Patrick O’Farrell’s Vanished Kingdoms: Irish in Australia & New Zealand. A quick check of my local library catalogue said no copy held and a wider search showed only three copies in Queensland – one in the Brisbane City Council libraries and two in universities in Brisbane and Townsville.

My next session was Cara Downes from National Archives of Australia talking about the Chinese in Queensland. There are lots of digitised files and photographs for Chinese families as the White Australia policy meant that these families were documented especially if they were coming into or returning to Australia. There is a published guide Chinese Australian Journeys free to download from the website.

Marion McKenzie spoke about After the War using the Oxley Chelmer area of Brisbane as a case study. She also touched on the flu epidemic which coincided with the return of many soldiers who were then quarantined. Settling back home was often difficult and there were employment and soldier settlement schemes to help them. There is also the National Archives of Australia online exhibition 1918 A Different Life. 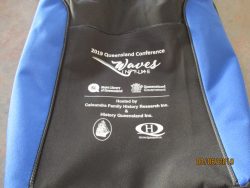 For something completely different, Liesl Harrold’s Can I Map That? demonstrated how you can use Google Earth Pro to help interpret documents and gain a clearer understanding of what happened. Her example was a death by drowning and my mapping the various witnesses from their depositions she could plot where the person must have fallen into the creek. Fascinating.

Louise Coakley was the second keynote speaker talking about DNA which was just another record source to be combined with other sources. Although it has had a tsunami type effect on research in Australia in the last few years. It is particularly useful for brick walls, dead ends or inconsistencies. Unfortunately there was a techno fail and Louise had to do the talk without the benefit of her slides which were sent to attendees after the conference.

My next session was favourite blogger Sharn White and it was on telling the stories of our immigrant ancestors. One phrase resonated with me – so much is NOT passed on and that is totally true.  Try to imagine why our ancestors left, what the voyage was like and how did they settle in their new land. Use a timeline to tell their story. National Archives of Australia got another mention for their website Destination Australia where you can upload your own stories. Sharn also mentioned RootsTech with seven fantastic storytelling tools and apps.

Michelle Patient‘s Reviewing Your Research was all about taking another look at your research to see what you may have missed or what is new since last time you looked. Have you collected all the evidence for your family? Use all resources not just the common ones. Remember not everything is online.

The final session of a very long Saturday was Jonathan Richard’s talking about Lost Records, in particular the Gall Estrays which were removed from Queensland government files before finally being returned. We know that not all records survive due to fires and floods, and not everything can be kept but it doesn’t help when a government official is removing files that are of interest to him. There are 27 bundles in this collection and of interest to me was the Queensland Patriotic Fund which contains detailed family history of Boer War soldiers. Next visit to Queensland State Archives I might have a quick look at these as two of Mum’s uncles fought in the Boer War.

Saturday night was the conference dinner and wonderful food and lots of talking around the tables. All a bit noisy to hear but a good way to end the day.

An early start on Sunday saw Richard Reid highlighting personal stories in local history collections. There is so much history in local societies and most of it is not online. This reminded me that I have been planning to go to Landsborough Museum & Historical Society for some time as they have the papers of Stan Tutt a local historian who first spoke to me about my Carnegie family back in the late 1970s.

Barb Toohey‘s talk on Who Wants My Work was exactly what I wanted to hear. It was interesting how she described downsizing her paper files, tidying up her efiles and photographs, writing up stories and compiling charts and giving it away to others. I have been trying to downsize for years and yes I have minimised my files and books but it still occupies a room of its own. I need to be more ruthless and set time aside to do it regularly. Her final thoughts were around estate planning and have you left your passwords with someone – document what you want done with clear instructions.

The final keynote was Jon Prangnell on an archaeological excavation of the Old Brisbane Burial Ground. This was fascinating as they recovered and identified bodies (with no extant burial records) and his methodology on how they eliminated possible suspects. Classic paper research matching up with forensic evidence. A great final session.

All too soon the conference was over and it was time to say goodbye to everyone. Apart from the one techno glitch everything went smoothly. The venue was suitable, easy to get around, the catering superb and plentiful and catching up with everyone was fantastic and meeting new people as well. The next History Queensland conference should be in 2021 but the venue has not yet been decided. Caloundra Family History Research are to be congratulated on organising such a fantastic time for everyone. Well done everyone and I hope 2021 comes around quickly.