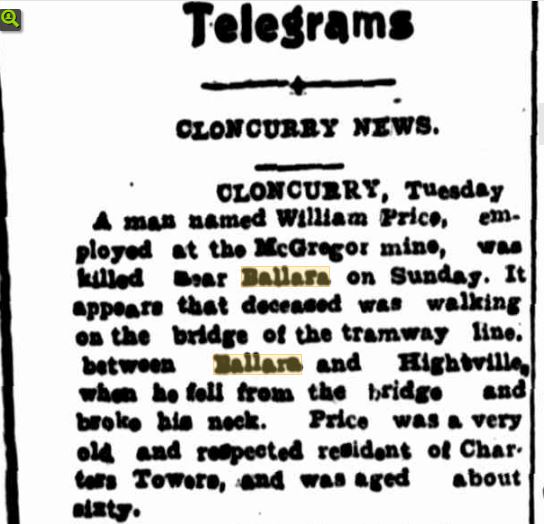 Trove Tuesday – Why You Can’t Find Someone

For my Trove Tuesday post I went looking for the death of my great grandfather Thomas Price who died when he accidentally fell from a bridge in 1918 while on his way to work. Over the years I have looked at both microfilm newspapers and more recently the digitised newspapers in Trove. As Thomas Price died in a remote part of western Queensland I suspected that any coverage of his death might not be extensive. However, I felt that there should have been at least a report or two. After all, there was an inquest into his death.

I started with my usual search for ‘Thomas Price’ as more newspapers have been added since I last looked. Then I moved on to place name searches – Wee McGregor, the mine where he was working; Hightville, the nearest town and Ballara, the next nearest town. All out near Cloncurry in far western Queensland. I also narrowed the search down to 1918 and in particular the month of June. 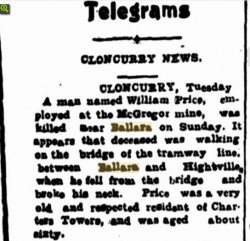 Lo and behold, I found him when looking at entries for Ballara. But the report was not under the name of Thomas Price. There is a well known saying ‘don’t believe everything you read in a newspaper’. How true! The report of Thomas’ fall from the bridge was published in The Evening Telegraph (Charters Towers) on 19 Jun 1918 but under the name William Price. No wonder I couldn’t find it with a totally wrong given name.

There was another brief report in the Townsville Daily Bulletin on 18 Jun 1918 but under the name Tom Price. I have never thought of him as Tom, only Thomas although we should always think of name abbreviations when we are searching. It is hard trying to picture him as Tom, it sounds so much more relaxed and informal.

His wife Elizabeth never remarried and died in 1944 in Brisbane. A new search for anything on her revealed two bereavement notices in The Telegraph on 9 Jun 1944 which provide further clues. There is a reference to the Thompson Estate Baptist Church which indicates Elizabeth kept up her association with the Baptist Church having been a Deaconess at the Charters Towers Baptist Church in the early 1900s. The second notice is from her son George Price and refers to his workplace and while this is not a lot of information, it does help to indicate how the family felt after losing their mother.

A search for a funeral notice was successful and in The Telegraph 22 May 1944 the funeral notice lists all her children including towns where they lived if not in Brisbane. Elizabeth was living at O’Keefe Street, Thompson Estate and it was probably within walking distance to her church as I know the family did not have a car. 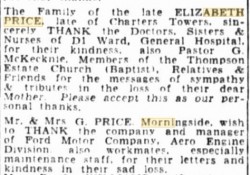 There are a lot of reasons why we might not find someone. Not everything is digitised yet and we do need to revisit our searches to see what’s new. Also remember to think about nicknames and abbreviations as they may have been used instead of the more formal given name. Of course if a reporter has got the name completely wrong, then the only way you might find a reference is by searching on a place and narrowing it down by a date. Finally, OCR (optimal character recognition) may not be very accurate especially if the paper is fragile, faded, blurred or damaged.

Why not spend a few hours on Trove and see what you can learn about your family? Good luck.