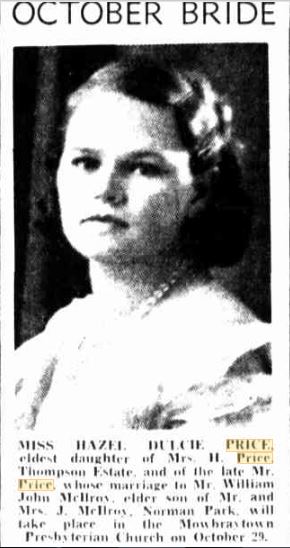 Trove Tuesday – A Beautiful Bride and An Accident

For today’s Trove Tuesday I went looking for my mother’s sisters. Mum was the youngest of 10 children and was only a small child aged under 10 when her four sisters married in the late 1930s. Mum had more in common with her nieces than her sisters.

So could Trove provide information on Mum’s sisters. Thanks to the digitisation of the Brisbane Telegraph I was able to locate a pre wedding notice for the eldest sister, Hazel Price. There is not a lot of information in the caption but it does say where the family was living, who she was marrying, William McIlroy (Bill), his parents and where they were living. The date and place of the wedding are also given. All clues that can be followed up in electoral rolls or by obtaining a copy of the marriage certificate.

Of more value is the photo itself – I have never seen a young photo of Hazel and it is easy to see a family resemblance. I was a flower girl for Hazel’s eldest daughter so our families were close. Mum has a photo of that somewhere and I must seek it out next time I visit.

The following week there was a brief report on the wedding itself. This had lots of family information I was not aware of. Hazel was given away by her uncle Les – her father Henry Price had died in early 1938.

One of her bridesmaids was her sister Beryl and the article gives a detailed description of their dresses and floral bouquets. It even tells me what the mother’s of the happy couple wore although I can’t really see my grandmother in a ‘black and white sheer with a black picture hat’. But then my memories of her are as a very old lady!

Hazel’s brother Gordon was one of the groomsmen. The reception was held at the Masonic Hall, Norman Park.

It always pays to keep looking in Trove because there was yet another article on the following Monday. It was a photo of the happy couple post wedding having been showered in confetti.

So much from just three articles.

I couldn’t locate anything for either Mavis or Alma, the next two sisters. While there was nothing on the fourth sister Beryl’s wedding I did locate reference to her being in a car accident in 1940 when she was 17 years old. I know it is her as the address, O’Keefe Street, Buranda fits other family information. She suffered abrasions on her left elbow and right ankle when she was knocked down by a car on the corner of Park Road and Dibley Street Woolloongabba at midday on Sunday 28 April 1940. She was driven to the casualty ward of the Brisbane General Hospital and after treatment, was allowed to go home. That was just after Mum’s 6th birthday so she has no real memories of the accident.

So much of our family memories are lost in the mists of time. Thanks Trove for helping to rediscover these fascinating stories and giving us extra insight into my aunts’ early lives.