Since 2011 the Central Auckland Research Centre has been issuing the Trans Tasman ANZAC Day Blog Challenge. Each year I take part and focus on one of my military ancestors. This year I am revisiting a family that I first wrote about for ANZAC Day 2013. Read the original post here.

Why repeat a challenge on the same family?

Back in 2013 I had no photographs of either Robert Finn, John Finn or Denis Patrick Finn. Now I know what all three brothers looked like. A wonderful example of why you need to revisit your searches from time to time. 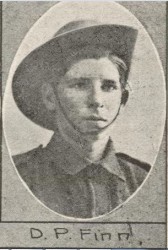 My first discovery was a photo of Denis Patrick Finn in the State Library of Queensland‘s soldiers’ portraits project. The Library digitised at a higher quality almost 27,000 images from The Queenslander, a newspaper that published soldiers portraits before they left for overseas. Seeing this photograph made me recheck Denis’ age as he looks so young. Sure enough, he lied on his enlistment form as he was only 17 years old. He became a German prisoner of war and spent his 18th birthday in a prison camp.

However I could not find images of either Robert or John Finn in the Library’s database.

I regularly recheck Trove, especially when newly digitised Brisbane newspapers are added. In The Week on 31 Jan 1919 there was a photo of all three brothers together and a brief description said they were the sons of John Finn of Brisbane.

Now I know what Robert and John Finn looked like, although the newspaper image is very grainy. Last Friday I went to a WW1 talk by someone from State Library of Queensland and I mentioned that I couldn’t find photos of the two brothers in the database.  They thought this was odd because the database does capture most soldiers’ portraits. So today I sat down to have another look at the database. 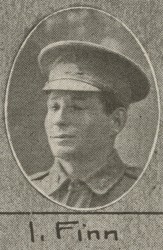 This time I only searched on the surname Finn to see how many images were returned. I have done this previously but Denis was the only one I could place as his full name was Denis Patrick Finn which was a match for the D P Finn portrait. Today I had a closer look at the I Finn portrait and thought I recognised it.

Sure enough it is an exact match for the John Finn portrait published in The Week only the caption has I not J Finn – a simple transcription/indexing error at the time of publication in 1917. A cross check in National Archives of Australia’s RecordSearch revealed no I Finn dossier.

I still have to find a good image for Robert Finn. Is he in the database but under something other than Finn? Or did he simply miss getting his portrait taken by The Queenslander?

I am inclined to think it is there somewhere as The Week published his portrait and they used his brother John’s portrait although the one for Denis is different. I can also ask the Library to do a good quality image from The Week but I would have to pay for that service. If I do that I will probably get photos of all three brothers and mount them in a frame.

While the images have not added anything to my knowledge of the brothers, I now know what they looked like and that is more than I knew three years ago. Ongoing projects can reveal new information on our military ancestors and if you are not finding someone, is it because of an indexing error, either in the current project or way back when the record was created. Keep on searching, lest we forget.