Today has been an incredibly exciting Trove Tuesday. I picked my Carnegie family and in particular my great uncle John James Carnegie because I only had scant details on this family. I knew he died as I have a funeral notice but sadly no date and it is too recent for Trove. The funeral notice mentions that he was a Rat of Tobruk but I have never been able to find his army dossier. I also knew from family information that he had married twice and had children from both marriages. 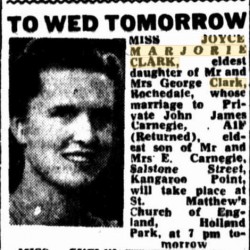 What could Trove now tell me about him? First up I found a pre wedding notice in The Telegraph for his marriage to Joyce Marjorie Clark, his second wife. There is even a photograph of her and they married on 5 Nov 1943. It mentioned that he was a Private in the AIF (Returned). Another quick search in National Archives of Australia’s Recordsearch but still no reference to him.

At least the pre wedding notice gave me a date to start searching back for his first wife’s death and burial. Sadly Jean Carnegie died while John was overseas and the funeral notice mentions that he was serving with the 9th Battalion (why no file?).

In addition there are a few later memorial notices inserted by Jean’s parents and her brothers. The McLeod family also lost a son just six months after their only daughter Jean’s death – 1942 must have been a very sad year for them.

Jean left a young daughter and with her father overseas, I assume she must have gone to live with Jean’s parents.

Now I had three newspaper references to John James Carnegie serving in the 9th Battalion overseas. I then checked again the DVA nominal roll for WW2 and the Australian War Memorial but still no success.

In my Brickwalls talk I tell people that the most common reason you can’t find someone is because of an indexing error. I started playing around with the databases first with the Carnegie name and then finally I had the light bulb moment.

Yes it is indexed under John James with no reference to Carnegie!

The date and place of birth are correct and the next of kin is given as Helen Doyden – his married sister was Helen Dryden which is a pretty close match. John James also served with the 9th Battalion so I am reasonably confident I have finally found the file.

But of course we need to prove everything, so I have made a reference request to National Archives of Australia to check the file and confirm the name of the soldier. I could not find John James on Discovering Anzacs under either name so I asked about that too.

There is a 30 day turn around time so within a month I will have solved something that has puzzled me for years. Thanks to Trove I found more evidence that John James Carnegie had been in the military. Then it was just a question of discovering the file. Let’s hope I have! Thanks Trove.