On Saturday I attended the Colleen Fitzpatrick seminar co-hosted by the Queensland Family History Society and the Genealogical Society of Queensland in Brisbane. Colleen gave three talks and there was a morning tea break. The venue was St Joseph’s College, there was lots of parking available and it was central to most areas of Brisbane. What I also liked was that there was a note taking desk at each seat as it was a student lecture theatre. Some people didn’t use them but I find it easier to balance my notebook on a hard surface rather than my knee or mid air.

Both societies operated a book stall before the seminar and during the morning tea break. There seemed to be lots of sales going on. It was a beautiful Brisbane day so all outside with lots of room. On entry we were all giving a goodies bag which was a QFHS bag (a smaller size which I find more practicable for some things) with information from the Queensland State Archives, leaflets on QFHS seminars and GSQ seminars coming up, a leaflet for the In Time and Place local, family and social history conference and a copy of the Federation of Family History Societies (UK) Our Australasian Really Useful Information Leaflet (you can download your own free copy). 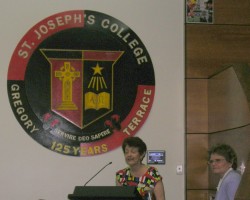 When I booked this seminar, I checked Colleen’s talks against the recent Canberra AFFHO Congress program as I did not want to hear the same talks again and they were all different. What I found was that one of the talks was a repeat of one Colleen did at the Adelaide AFFHO Congress in 2012. It was three years ago but I did still remember some of her quizzes using photos so the first talk Forensic Genealogy: CSI meets Roots was more a trip down memory lane and if you have access to the Adelaide Congress papers you can read her paper. Some of the key points were to look at what is happening in a photo, any details not quite right, anything/anyone missing, any writing, dates and don’t forget to look at the back.

After morning tea, the second paper was You Will Never Look at Your Old Photos the Same Way again which was following on from the first paper.  More tips on how to date a photo including lot numbers and logos, fluorescent dyes were added to photo copy paper after 1955, identifying the type of camera eg the Box Brownie was after 1900, cardboard was first manufactured n 1870, daguerreotypes from 1840 and make use of all sources to determine when and where.

The third talk was the Database Detective where Colleen was looking at what you can do with data collected from records such as coroner’s reports, mental asylums, orphanages and so on. There are stories within these types of records. The use of timelines can help sort out stories if there are conflicting documents. The impact of events can also change families and she gave the example of the European 30 Years War which meant that women had children later (in their 30s) leading to a generational gap. Also illnesses could have the same impact and the example was ergotism (St Anthony’s Fire) which affected young children, teens and the elderly.

One of my families all died within a short time of each other so I guessed it was some sort of illness. I simply Googled the date and place to find that the parish suffered a cholera outbreak at that time. I then followed up by reading newspapers for the area and got a broader picture that way.

Looking at my notes now the only URL I noted (apart from Colleen’s website) was the one for the Box Brownie camera which was an AOL site and I don’t have an account so I can’t see it (members.aol.com/Chuck02178.html).

Not having lots of URLs after a talk is most unusual as I usually write down all URLs mentioned by speakers even if I already know of the URL as it helps me keep track of what a talk was about. So I was left a little flat as to where to next, apart from reading her books and looking at her website.

All the talks were interesting and entertaining as Colleen is a good speaker but you need to take the broad lessons of forensic genealogy and apply them to your own research. The photo tips were useful but you can get more detailed assistance on dating photographs from books written by Jayne Shrimpton (UK) and Graham Jaunay (Australian).

On the plus side it was an opportunity to catch up with Brisbane geneamates and there was certainly lots of chatting going on at morning tea, and before and after the seminar. Also it reinforced for me the need to include historical events into family histories and the easiest way to do that is to draw up timelines and put in key dates from history and your families. The obvious example at the moment is World War One – how many of your family members fought in the war, how many women never married, how many men came home and never married, were there gaps between children born because husbands were overseas and so on.

Both societies are to be congratulated for bringing Colleen to Brisbane and giving people a chance to hear her talks, especially those who had not attended either Congress.