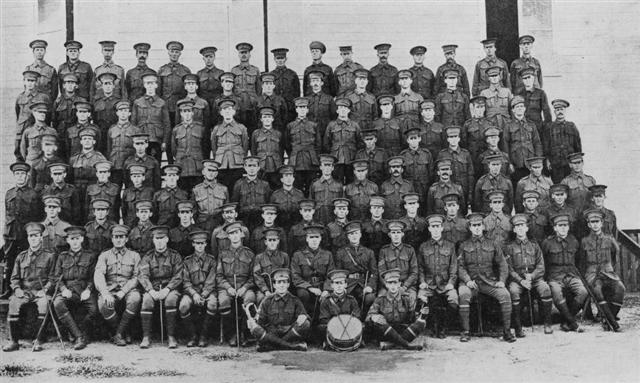 As usual I am participating in Kintalk‘s Trans Tasman ANZAC Day blog challenge. This year my tribute is to Alexander Thomas Davis my first cousin three times removed who saw service in World War One and died of wounds shortly after arriving back home.

Alexander was the son of Charles Brandon Davis and Clara Stanley Carnegie and was born in 1892 at Toorbul, on Pumicestone Passage near Brisbane. He had an older brother John Carnegie Davis and their father Charles left the family in 1893 when the boys were just three and one years old. Charles was heading to the Western Australian goldfields and a few family letters show that he did arrive there but Charles never returned home to his family. It is believed that he entered into another relationship while in WA but his death has still not been located. 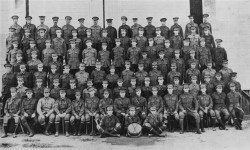 Like other young men, Alexander enlisted for service in World War One and his army dossier is digitised and online at the National Archives of Australia. He joined the 6th reinforcements of the 42nd Battalion on 1 October 1916,  a week before his 24th birthday. At the time he was working as a fisherman.

His unit left Sydney on 22 December 1916 on board the Demosthenes and arrived in Plymouth on 3 March 1917. He was reported sick on arrival (mumps) and was eventually released from hospital and sent to France on 13 July 1917. Just under a year later on 9 June 1918  he was wounded in action and  sent back to hospital in England with a gun shot wound to the head.

Alexander’s army dossier includes numerous medical reports on his injuries. The left occipital region of his head had a depressed fracture with his brain protruding, the wound was washed, excised and sewn up. While in hospital he reported that he had slight dizziness when moving. In another report he complains of headaches and problems with his vision. Another doctor reports that there was bone missing from his skull and that Alexander should be provided with a skull cap. An operation was not considered advisable at that time.

Alexander was embarked back to Australia on 19 October 1918 on board the Sardinia. Sadly he died at his Toorbul home on 5 May 1919. His death certificate records the cause of death as oedema of the brain from a skull injury a few months ago from shrapnel. A portion of his skull, about two inches in diameter was not covered by bone and his brain was bulging. It was reported that Alexander had a blow on the head shortly before his death but it was to the other side of his head.

Ultimately his death was attributed to war wounds and he has a military plaque in Caboolture cemetery. A year after his death there is a memorial notice for him in the Courier Mail recording his service with the 42nd Battalion and that he died from the effects of a wound received in France. For his service Alexander received the 1914-1915 Star Medal, the Victory Medal and the British War Medal.

In one of the local histories of the area, From Spear and Musket 1879-1979 Caboolture Centenary, there is a sad story of how Alexander died of the black flu and that his mother was forced to leave his body alone at the morgue. However, official documents do not support this story and a check of newspapers at the time do not indicate that the black flu in Queensland at that time. This is a reminder that all sources should be checked as time can distortpeople’s memories of events. 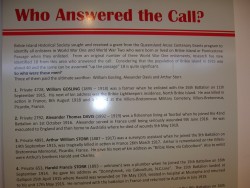 Although Alexander did manage to return home, his injury was  too severe for him to continue a normal life. Within months of returning to his family he was dead, having survived for nearly twelve months with a severe head injury. He was single and therefore there are no direct descendants but his brother John had five children and there are descendants who remember the uncle they never knew. In addition Alexander has been remembered by his local community. The Bribie Island Historical Society have a project to remember all those from the local area who served in World War One and a permanent plaque will be erected to their memory.