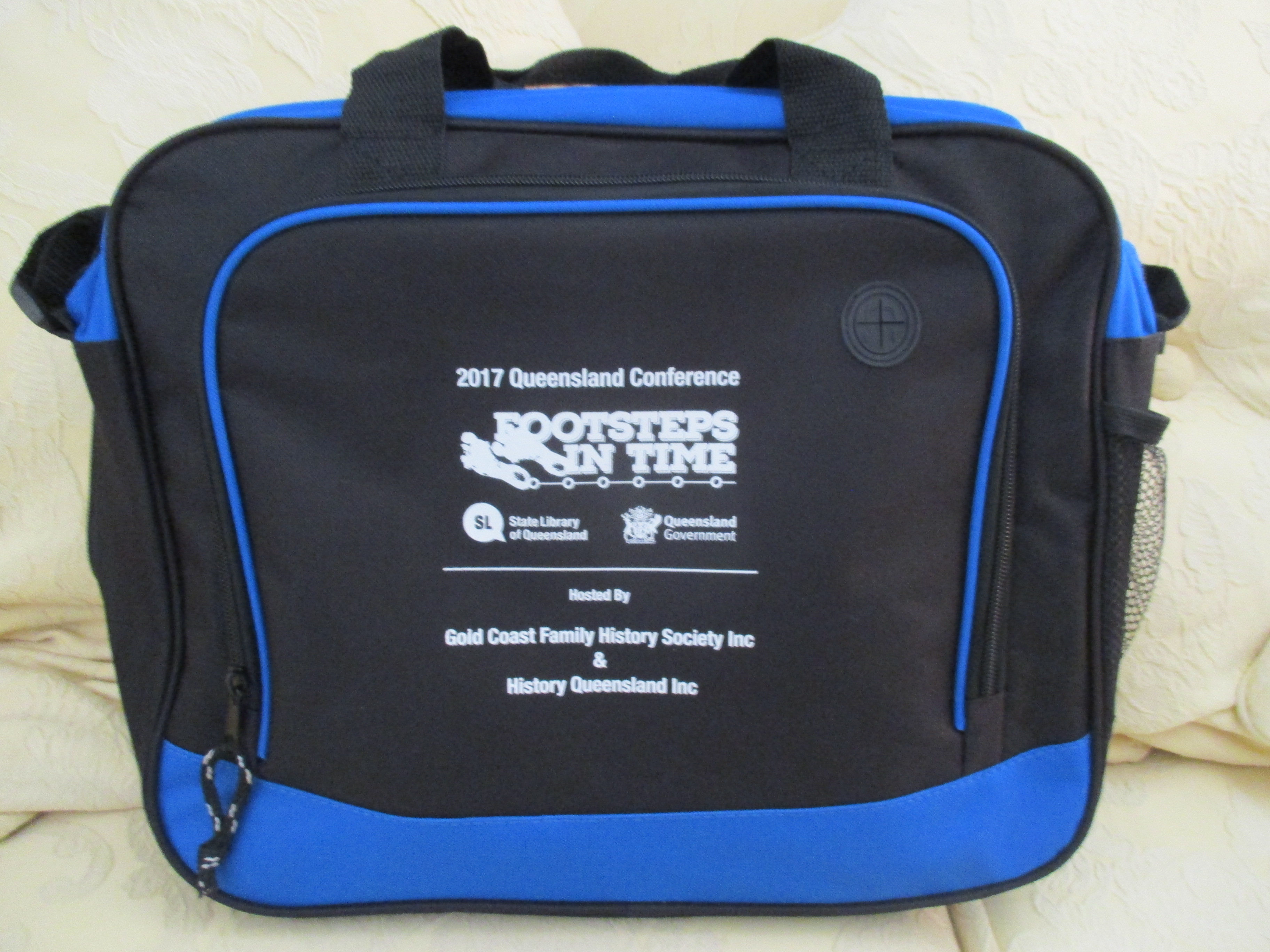 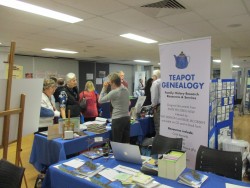 The second History Queensland family & local history conference was a wonderful success (apart from a very rainy Friday). With the theme Footsteps in Time it was held on the Gold Coast from 19-21 May 2017. Gold Coast Family History Society was the host and their volunteers were everywhere making sure things happened when they should.

The Friday program had three free (yes free) public talks from Ancestry, the National Library of Australia (Trove) and FamilySearch. I attended all three sessions – brief points from each include:

The afternoon had a free public family history fair with lots of exhibitors and familiar faces so it took a while to wander around and chat to everybody. It was great to see the support from local libraries, Queensland State Archives and State Library of Queensland. I also booked into the two Master Classes on DNA presented by Helen Smith who also had three handouts for the two classes. The more you hear, the more you absorb and the more you understand. I readily understand how it matches up with cousins but it is a bit harder if you are trying to find unknown people from illegitimacy or adoptions. Someone has to test and then match up whereas with cousins or suspected relatives you can ask them to do the test. There was another class on Preservation which I didn’t go to as I wanted to spend more time at the Fair.

The evening function was a book launch by Boolarong Press at the Southport Library. Just a quick walk up the road from the venue but the bucketing rain meant that most of us arrived a bit wet. It was a shame really as some people obviously didn’t turn up but that meant more of those delicious canapes and drinks for those present. The book was the HMAS Diamantina by Peter Nunan and I have wandered over the Diamantina as she is now drydocked at the Queensland Maritime Museum in Brisbane.

The Saturday program was all day with a choice of two talks at every session except the keynote at the start of the day, plus the exhibitors were still onsite for those who missed the Fair. Mark Finnane, first keynote, spoke about the Prosecution project which is wonderful if you have criminals in the family. My next session was Heather Garnsey on Family Trees Online: Gift or Curse which was really good as she summed up the pros and cons of each. I missed Jane Harding, from Noosa Library on the Boyneside Soldier Settlement.

My next choice was Martyn Killion on early NSW research before 1856, always a tricky area and he mentioned the usual resources. He also talked about the Biographical Database of Australia which can be helpful in sorting out some of those convicts with the same name. I missed Soldiers of the British Army sent out as convicts by Jan Richardson.

I shouldn’t really say missed because all speakers were asked to provide a handout relating to their talk which were collated onto a USB sponsored by MyHeritage. So when I get some time I can read these papers and follow up any links. A great idea and cheaper and easier than print publishing.

Eric Kopittke’s talk on Church Records covered an amazing range of resources and how they can help family history research. I missed Rowena Loo’s talk on Government Archives as I spent most of my working life in them but they really are the place to find your ancestors. Barb Toohey’s Nana always said there were no convicts in the family, but I wasn’t too surprised to find that Barb’s research had uncovered lots of them. Convicts may be Australian royalty now but not back then. The other talk was Stephanie Ryan on researching Amity Moreton Thompson born in 1824 at Moreton Bay.

Greg Cope’s talk on the National Archives of Australia‘s WW1 repatriation files was excellent and I really must follow up on my three Finn brothers, John, Robert and Dennis Patrick. The files record the difficulties individual soldiers had on returning home, physically, mentally or emotionally scarred. Often the impact on their families is also recorded. Many of the files have been indexed into RecordSearch but if not, go to the National Reference Service and Ask a Question. Duncan Richardson was the other speaker on Forgotten Disasters in Brisbane in 1864.

Niles Elvery then spoke about the achievements of the QANZAC 100 Memories project for which I have to thank for my images of John Finn and his brother Dennis Patrick Finn (Robert Finn is still elusive for some reason).  A wonderful project with lots of resources online. Jeff Powell talked about Transport, Technology & Regional Development.

The final Saturday session was Janice Cooper on Honouring People in the Past which was mostly about how historical societies were creating online resources for their local areas. So don’t forget to see what historical societies are in the areas your ancestors lived. Jonathan Richards spoke about Poverty & Violence in Queensland History.

The final presentation was Martyn Killion giving us a brief look at the local and keynote speakers for the Bridging the Past & Future Congress in Sydney in March 2018. I’m thrilled that three of the keynotes are speakers I have listened to on Unlock the Past genealogy cruises so really fantastic to have them at Congress. It is a must attend event and only happens every three years. Check out the website and see who the keynotes are!

The Saturday night dinner was well attended at the Hotel Pacific at Southport. I can remember playing in the beergarden as a young child many decades ago and I have to say I prefer the old ambiance which seems to have been lost in its merger inside Australia Fair shopping centre. It was a grand old pub back then. Fittingly we were treated to a virtual pub crawl as the after dinner talk and who knew there were that many pubs in Southport.

Sunday only offered a keynote and three talks plus the opportunity to visit the exhibitors. Jennifer Harrison spoke about Immigration Depots in her keynote and we can only wonder what our ancestors felt when they came up the Brisbane River in those very early days. Paul Parton took us through researching with FamilySearch and how they are digitising more records to help us pinpoint our exact ancestor and meet the genealogical proof standard. I missed Bill Kitson’s Hydrographic Survey of the Queensland Coast.

Next was Pauleen Cass on Beyond the Internet and this is a wide ranging talk looking at all the ways we can document just about every aspect of our ancestors lives. But it may not be online as she demonstrated with examples from her own family history. Kaye Nardella spoke about Understanding Land Ownership in Queensland which I’m looking forward to reading.

The final session was my own presentation about the Public Curator in Queensland and while I did a handout for the USB, I have also put the talk up on the Resources page of my website, scroll down to Presentations. John Graham spoke about Private Abraham Chapman and John is well known for the Ryerson Index. 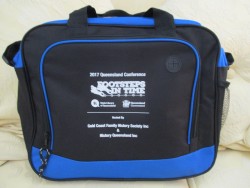 The venue was wonderful, the catering delicious, and the conference satchel one of the heaviest I have ever encountered. It was full of Gold Coast publications which brought back many memories of those early holidays with my family. True nostalgia plus there were lots of leaflets and brochures on the various exhibitors which I am still to work my way through.

The conference organisers (Gold Coast Family History Society and History Queensland) are to be congratulated for their detailed planning which meant that everything went to plan except for those people who don’t seem to understand what ‘turn your phone off’ means. How hard can it be and yet there were a few.

The next conference will be in 2019 in Caloundra (organisers Caloundra Family History Research and History Queensland) which is a bit closer to home and it is already in my calendar. Apologies for the long post if you are still reading, but these really are must attend events, and it was good to see so many people from interstate too. Roll on 2019 but don’t forget Congress in March 2018.