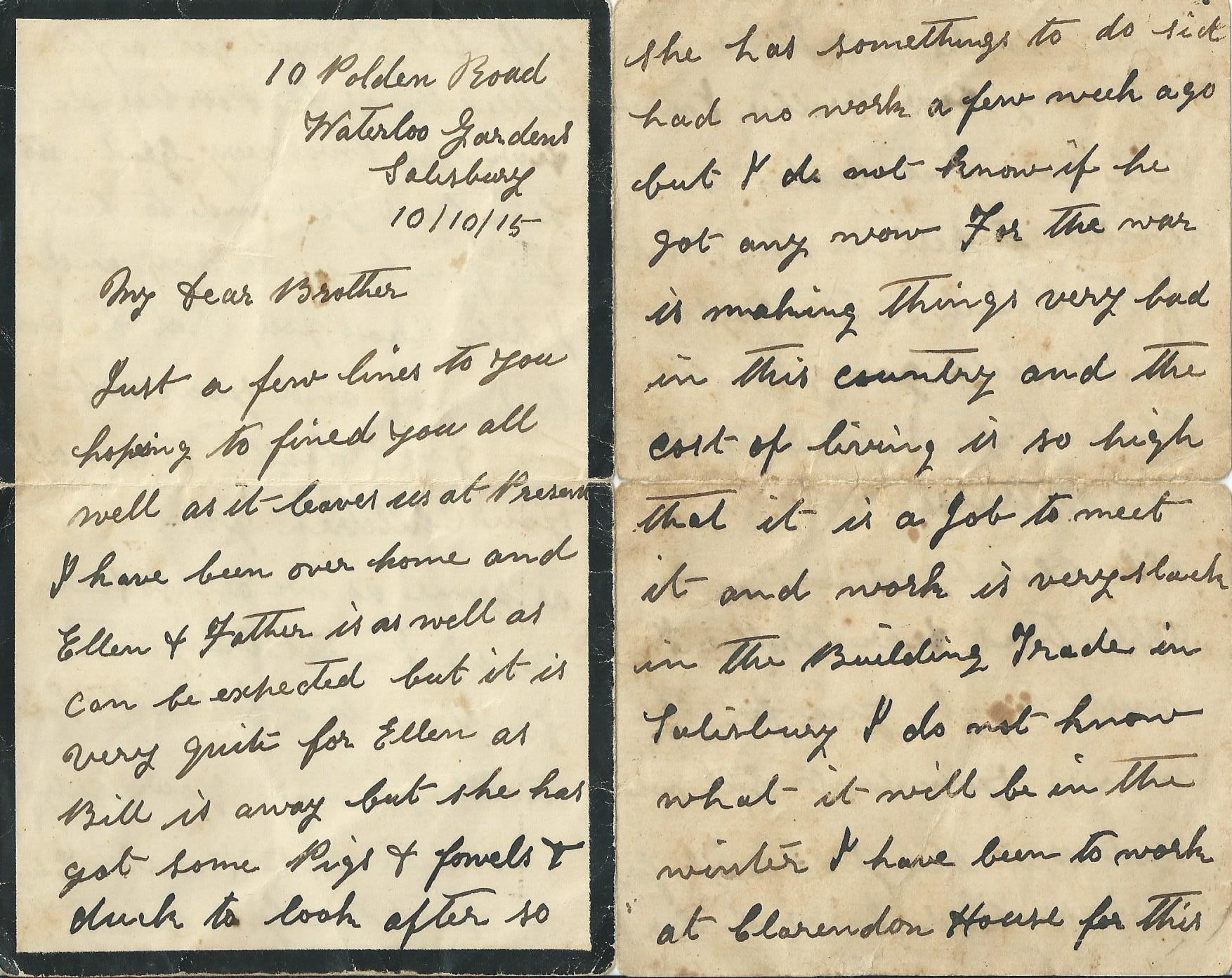 So far I know of seven bloggers who are taking up the challenge from time to time and I have put links to their individual entries at the end of each week’s blog if they have submitted something for that week. Thanks Judy Webster, Sharn White, Cassmob, Anne, Campaspe Library and Sharon for participating and encouraging me to keep up the blog challenge myself!

With the widespread adoption of email , Facebook and other social media as a means of communicating with family members, letters and correspondence between people is becoming a rarity. As family historians however, we cherish finding long lost letters written by our ancestors or correspondence highlighting family events and containing information that we are not likely to find in official documents.

I am lucky in that I have managed to find isolated copies of letters that have survived purely by chance rather than any real thought to keeping them for future generations. In this blog post I will share two letters – one from my father’s side of the family and one from my mother’s side. 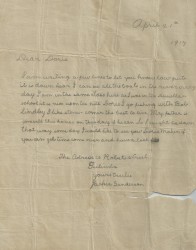 The first was written by my paternal grandfather John (Jack) Martin Gunderson just after his 8th birthday in 1917, nearly 100 years ago. It is written in pencil on a single sheet of paper and is addressed to his lifelong friend and cousin Doris Maher. He appears to be letting her know their new address and what it is like living closer to the river. He can see the boats and he goes fishing with Bob Lindley.

School gets a mention and he is in the same class at Bulimba that he was in at Dunellan. There is mention of his father trying to sell this house and that my grandfather’s favourite place to live is Stones Corner and that he hopes to get there someday. He finishes the letter by saying that he would like to see 10 year old Doris and invites her to visit.

The letter is signed Jackie Gunderson and I think it is this signature that really brings home to me that my grandfather was once a small boy who moved homes occasionally and missed his school friends and cousins. It has numerous spelling errors but then he was only 8 years old.

My Auntie Dorrie (really my father’s aunt) was very knowledgeable about the family but she only ever told me what she thought I should know. She stayed friends with my grandmother until my grandmother’s death in 1994, so we saw Dorrie quite regularly over the years.

Dorrie died in 2005, 28 years after her friend and cousin Jackie Gunderson. 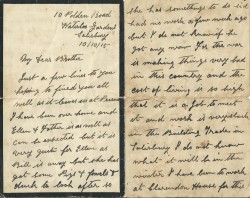 My second family letter was written to my great grandfather Herbert William White advising him of the death of his mother in 1915. It is written by his brother Robert on funeral writing paper (black edged). It starts with the hope that Herbert is well and that Robert has been to visit their father and sister Ellen who is staying with him while her husband Bill is away (presumably at the war and I really should follow this up).

Robert writes that Ellen has some pigs, fowls and ducks to look after and keep her busy. He goes on to say that ‘the war is making things very bad in this country and the cost of living is so high that it is a job to meet it and work is very slack in the building trade in Salisbury’.  He mentions that after he finishes a nine week job at Clarendon House he will have no work and he expects the winter to be hard.

Then the whole purpose of the letter, the death of their mother, Emma White. Robert goes into incredible detail of where she was buried – ‘we laid poor mother to rest in the front of the church on the right hand side going in to church straight across by the Bathurst Tomb in the old churchyard under the apple trees’.

Robert thanks Herbert for the money he sent but said that their mother had insured herself, and although it was not much it would ‘get a few little things for poor dear dad’. At the same time as sending the money, Herbert must have also enclosed a letter telling them about his family and Robert wishes them all good health. The letter is signed Brother Bob and Sister Elizabeth (Robert’s wife) – Good Bye and God Bless You.

It must have been hard for our ancestors who came out here and also hard for the family members left behind. Herbert never saw any of his family again and the only news was via letters which probably only happened occasionally.

In 1983 I asked one of the members of the Wiltshire Family History Society if they could try and find this grave for me and take some photos. Due to the detail in the letter they easily found the grave in the Alderbury churchyard and took a number of photos of the grave, church and surrounding areas for me. I happily reimbursed them for the costs of the photos and postage.

Next year I am going on the Unlock the Past Baltic genealogy cruise which leaves from Southhampton, not that far from Wiltshire. The plan is to arrive a few days earlier and take a day trip to Salisbury and visit Alderbury and Pitton and Farley where Herbert was born and the White family lived for hundreds of years.

These two letters, although brief, still tell me a lot of information about my ancestors and provide an insight into what their thoughts were at significant points in their lives. My family history is richer for these letters having survived – are there any letters or ongoing correspondence in your families whose stories need to be told?