The 52 different types of genealogical records I finally decided on are listed in no particular order (each week will be a random surprise). Anyone is welcome to do all or part of this blogging challenge.  Let me know if you are participating and I will put a link to your post under each week’s challenge.

So far I know of four bloggers who are taking up the challenge and I have put links to their individual entries at the end of each week’s blog if they have submitted something for that week. Thanks Judy Webster, Sharn White, Cassmob, Anne and Sharon for participating and encouraging me to keep up the blog challenge myself!

Also participating in this blog challenge this week: 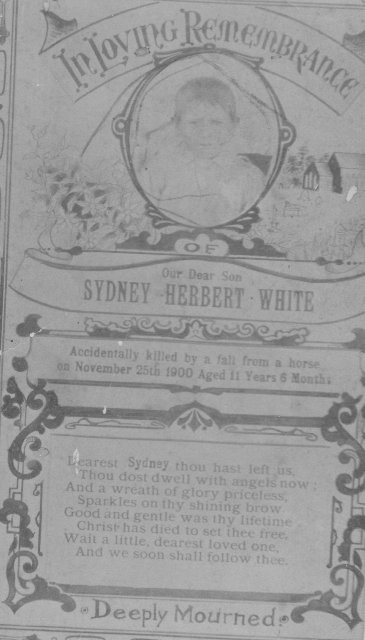 There is only one memorial card in my family history records but I have seen lots of memorial cards in other family collections. So why include memorial  cards in this blog challenge? The one in my family was loaned to me by my mother’s aunt back in the late 1970s so I am not sure now if the original still exists as Aunty Ivy died some years ago. But I have my copy and it started me on a search for what happened to an 11 year old boy who fell off his horse in Charters Towers in North Queensland in 1900.

The photo of Sydney Herbert White on the memorial card is the only one in existence, to my knowledge.  It is not a great photo or copy, as the original was not in good condition but the words Deeply Mourned and the verse that accompanies it reveal the family’s grief following the accident.

I wondered it there might have been an inquest into his death and I found a handwritten account with numerous witness statements at the Queensland State Archives. My great grandparents Herbert William White and Dorcas White nee Trevaskis both gave statements which told me more about Sydney, their eldest child.  He had been riding to see his grandmother Elizabeth Guy (formerly Trevaskis nee Rosewarne) when the horse was spooked and he was thrown off. Witnesses gave two accounts – one there was a dog and two there was a pile of rags but whichever it was, Sydney fell heavily and was taken to Mrs Guy’s, his grandmother’s house and a doctor and his father were sent for. His mother was already at her mother’s place. Sadly Sydney died shortly after his father arrived from what the doctor diagnosed as a broken neck.

If Aunty Ivy had not kept a copy of the memorial card, I might never have fully looked into Sydney’s death as he was my grandmother’s sibling and I tended back then to only spend money on certificates if it was a direct line or I needed more information on the family to go back further.  Of course these days we would head straight to Trove to see if we could find something on an 11 year old boy’s death.

And sure enough, Trove did not disappoint. By putting “Sydney Herbert White” as a search term there are two direct hits which now tell me even more than I previously learnt from the inquest. There is a paragraph published after the funeral. Like the inquest, it is sad reading – ‘A large number of the little boy’s fellow scholars at the Sandy Creek Sunday School testified their regard by following the funeral’.  The account was published in the North Queensland Register on 3 December 1900. The following week the same newspaper reported at length on the inquest, basically giving shortened versions of the various witness statements.

Back in the 1970s I did find a newspaper account of the accident in the New Eagle on 1 December 1900 but that microfilm has not yet been digitised. So remember not everything is in Trove yet. Perhaps we all need to rediscover our microform skills?

Sydney was buried in the Charters Towers cemetery and his grieving parents erected a tombstone in his memory. The verse again shows their grief – ‘as the ivy clings to the oak, so our memory shall cling to thee’.  I have visited the grave and taken a photo for the family history.  Sydney has not been forgotten and although his life was short, he left many records behind.

This blog challenge is all about revisiting my older research to see if there are any new records and information. Yet again I am amazed at how much more I have learnt about one event. Even if you do not have any memorial cards (although you should definitely ask older family members), there are probably children in your families who died young. Maybe you can find out more about their short lives by paying Trove (or Papers Past if you have New Zealand ancestors) a quick visit.