Anyone with European and other non British ancestors should really try to find the naturalization records for their ancestors. My father’s family was Norwegian with Anders (later Andrew) Gundersen arriving in Queensland on board the Humboldt in 1873 with his wife Aose (later Mary). Sadly they lost both their two young sons on the voyage out.  Another two sons and a daughter were born in Queensland.

Shortly after arrival in 1874 Anders selected a homestead lease in the Wide Bay land district and lived there with his family for the next five years. In 1879 Anders applied for the deed of grant and had to provide proof of fulfillment of conditions for the selection. This he did and was granted the deed to the land in December 1879. Part of the process was becoming naturalized and he did this in Maryborough on 20 August 1879, the same date he started the process to gaining freehold title of his selection. 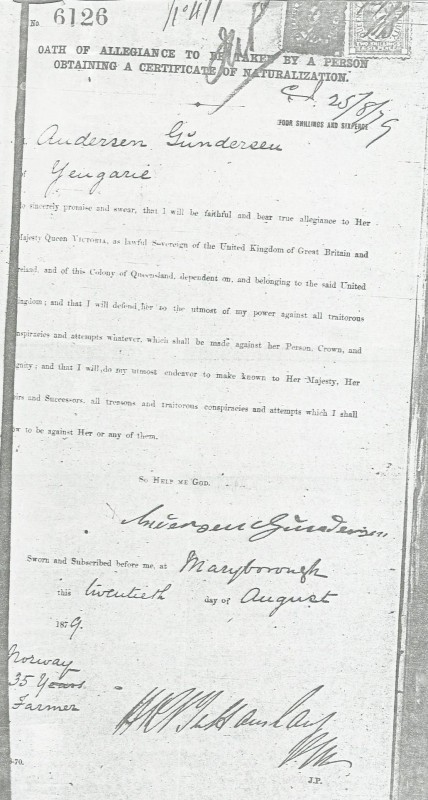 lization certificates are not overly informative mainly giving the person’s name, address, country of origin (sometimes even town is included), age and occupation. Sometimes there may be other remarks. What I find most interesting is the person’s signature which is usually written in their native language. In my example we learn that Anders was a 35 year old farmer from Norway who was living at Yengarie near Maryborough, Queensland.

Anyone with Scandinavian ancestors will know that the use of patronymics made it confusing for immigrants and those they were dealing with in the colony. Anders was the son of Gunnar Jorensen so out here he became Andersen Gundersen (dying as Andrew Gunderson). One of his sons was named Gundersen Gundersen later known as Gundah Gunderson. So we need to be flexible when searching for them in the indexes!

Naturalization and citizenship records can be found in the various State Archives and after 1901 in the National Archives of Australia and note that some States transferred their early naturalization records to the Commonwealth while others retained them. So read the fact sheet or brief guides for the State that you are researching to find out where the records are. The information may also vary depending on the time period. For example, naturalizations
pre 1860 usually have more information including the ship of arrival which can be very helpful. Post 1900 records are different again.

While my great great grandfather’s naturalization certificate does not tell me anything new it does give me his original signature before his name was anglicised. It must have been hard for them in an English speaking country and I often wonder how they learnt English and if they ever missed their home country. Very little information has been passed down about Anders and Aose so I appreciate every piece of evidence I can locate about them.

Naturalization records and citizenship records may just have a piece of your family puzzle so if you have non British ancestors, these records are definitely worth a look.