In 2022 I am participating in Amy Johnson Crow’s blog challenge 52 Ancestors in 52 Weeks. This will keep me motivated to writing my family stories as short blog posts. During the last two years my blog posts have been few and often far between. Hopefully I will be able to keep up the pace.

In January the theme is Foundations and Week 2 is about our Favourite Find. Having researched my own family history for 45 years I have lots of finds that have excited me or been unexpected. I think the hardest part of this blog challenge is deciding on which ancestor to write about.

Discovering my mother’s grandmother was Dorcas Trevaskis, I was fascinated to know that she was the South Australian born daughter of two Cornish emigrants. Cornwall is one of those places still on my bucket list. If not for Covid I might have already been there.

To set the scene, James Henry Trevaskis (son of William Trevaskis and Mary Hosking) emigrated to South Australia in 1864 with his wife Ann Semmens and three children. Sadly, Ann died at Moonta not long after the family arrived. James Henry, a miner married Elizabeth Rosewarne in Wallaroo, South Australia on 17 September 1865.

Elizabeth was the daughter of Henry Rosewarne and Mary James Pearce. She was baptized on 17 May 1837 in St Hilary, Cornwall. Her exact arrival has not been located. Her brother Henry Pearce Rosewarne and his wife Elizabeth Trevorrow came out to Adelaide, South Australia on the Lady Milton on 29 November 1865. Elizabeth’s sisters Hannah and Susan Jane came out to Queensland on the Dilharree on 16 August 1876. By this stage Elizabeth was living in Copperfield, Queensland.

There is no evidence that Elizabeth was in contact with her siblings, however their emigration to South Australia and Queensland suggests that Cornish people in Australia may have kept in touch with those in the home country.

Now back to my direct Cornish line. James Henry and Elizabeth’s daughter Dorcas Trevaskis (my great grandmother) was born at Moonta on 26 June 1868.

Not long after Dorcas’ birth, the family left South Australia and made their way up to Copperfield in Queensland. The Peak Downs Mining Company had established itself there to mine copper. Here James Henry and Elizabeth had a son John Trevaskis in 1866.

By this stage I was a big admirer of Elizabeth Rosewarne. She had come out to a new country, married a man with three children, had her own two children and travelled from South Australia to Queensland.

Somewhere between 1870 and 1873 James Henry Trevaskis disappeared. No death, burial or any other information has come to light about what happened to him. We know that Elizabeth Trevaskis nee Rosewarne married again in Copperfield to George Guy, also a Cornishman on 25 November 1873. George and Elizabeth had three sons while they lived in Copperfield.

Mining copper slowed and the Guy/Trevaskis family moved north to the goldfields of Charters Towers. But not before they buried their youngest son Christopher Guy in the Copperfield cemetery.

The next test of Elizabeth’s endurance was the death of her husband George Guy on 24 December 1894. Fortunately, George Guy had been a successful miner and adventurer having gone to the mines in New Caledonia in the Pacific. This left Elizabeth in a relatively comfortable position with her family in Charters Towers.

In her 67 years Elizabeth Rosewarne experienced more life changes than many other women at the time. Her life as a miner’s wife was not easy and her many descendants are grateful that she made the decision to leave Cornwall. Finding Cornish ancestors was exciting, and I enjoy a good Cornish pastie whenever I visit South Australia. When I finally get to Cornwall, I want scones and clotted cream and other Cornish foods.

My fascination with Elizabeth Rosewarne also led me to a mitochondrial DNA test. From my genealogy research my maternal roots are deep in Cornwall. Perhaps that is why I have this fascination for all things Cornish? 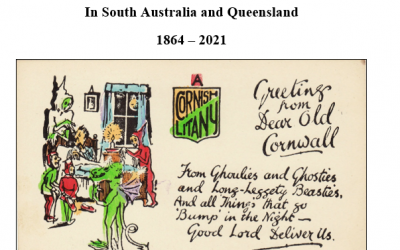