Yesterday was the launch of National Family History Month 2013 and as the voluntary national coordinator I had the pleasure of chairing the launch at the Brisbane Office of the National Archives of Australia. To start with I highlighted all the changes this year and I have included my talk at the end of this blog as it’s a bit lengthy and I don’t want you to miss what I have to say about the other speakers.

Next was David Swift from National Archives of Australia, Brisbane Office talking about what’s new at the NAA and there is heaps new and I know a lot of people commented on it during afternoon tea. Check out some of these new websites – ARKHive which is where you can help transcribe records to make them more accessible for all. NAA even has badges – beginner, enthusiast, expert and more!

Then there is new PhotoSearch where you can add tags and even link to map coordinates. I hadn’t even heard of SODA which is where you can see newly scanned records and it has social media buttons so you send links to all your media buddies. Destination Australia is for sharing post war migrant stories and their new A Ticket to Paradise permanent exhibition will launch next April.

NAA now have an agreement with Ancestry to index and digitise the incoming passenger lists and they will be available on both the NAA and Ancestry websites once completed. The Mapping Our ANZACS website is being redesigned into Discovering ANZACS and their touring exhibition is Shell Shocked: Australia After the Armistice. To find all these exciting initiatives visit the NAA home page and select Connect With Us.

Next was Kerrie Gray, AFFHO President presenting the Nick Vine Hall awards for 2013. Patricia Barth, Nick’s widow, from Family Tree Scriptorium was unable to attend due to the launch moving from Melbourne to Brisbane and sent her best wishes. And the winners are:
Category A societies with up to 500 financial members
Winner: Newcastle Family History Society for Journal No. 200 December 2012
Runner up: Nepean Family History Society for Timespan No. 126 March 2012

Category B for societies with more than 500 financial members
Winner: New Zealand Society of Genealogists for Genealogist Vol. 43 No. 336
Runner up: Heraldry & Genealogy Society of Canberra for The Ancestral Searcher Vol. 35 No. 3 September 2012 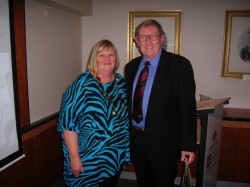 M 2013 keynote speaker was Associate Professor Cliff Pollard talking about Brisbane Hospital’s Doctors and Nurses at War which was really interesting. A copy of the slide presentation is here and if anyone is related to any of the people in the presentation, Professor Pollard would love to hear from you. He can be contacted via this website.

Cliff has many academic and professional qualifications but what I want to share with you is Cliff’s family history connections. Cliff and my partner Max are cousins sharing the same maternal grandparents. On Cliff’s paternal Pollard line his G grandfather was William Pollard.

My GG grandfather Anders Gunderson married a second time to Ann Pollard, the sister of Cliff’s G grandfather William so I am related to Cliff and Max via marriage. Now for another family history twist, I first became acquainted with Cliff’s sister June about 25 years ago when we corresponded on the Pollard family and if there was a connection between our two Pollard families. Little did we know then that I would move to Canberra years later and meet her cousin Max! Family history is indeed a small world.

After his talk, Professor Pollard formally launched NFHM 2013 and we then shared a delicious afternoon tea hosted by NAA, Brisbane Office. Now back to the details of my talk.

Good afternoon everyone and welcome to the launch of National Family History Month 2013. My name is Shauna Hicks and I am the national coordinator of NFHM this year. It’s nice to be back in Queensland and to see so many of my old friends and colleagues here today.

I’d like to take a few moments to outline the history of NFHM and to introduce some of the changes to this initiative first started by the Australasian Federation of Family History Organisations (AFFHO) in 2006. For the last seven years it was organised as National Family History Week but following the well deserved retirement of the founding coordinator, Lesle Berry, it was an opportunity to reassess NFHW.

Perhaps the biggest change was to trial a month long initiative rather than just a week. The extra time has allowed smaller organisations to incorporate their usual August meeting into a NFHM event and even some of their library days into NFHM open days. It has also avoided competition in the larger capital cities as the events can be spread out over the month allowing attendees to attend more events rather than having to choose which one to go to. I’m happy to say at this stage that there are more events in 2013 than in previous years.

Another major change has been with sponsorship. The last few years has seen tightened economic times and businesses are no longer in a position to contribute cash sponsorships which previously assisted with the administration of NFHW. In light of this, I turned sponsorship around and asked sponsors to contribute prizes to go into a prize draw at the end of NFHM. All genealogy and family history societies who put an event up on the NFHM web calendar and marketed their event as an NFHM event are eligible to be in the draw. This new approach means that sponsorship continues to benefit the winning societies for the whole year and is not simply spent on administration, printing and postage.

We are grateful to Australian Family Tree Connections, Ancestry.com.au, Findmypast.com.au, genEbooks, Gould Genealogy & History, Inside History Magazine and Unlock the Past for their continued sponsorship and supplying the prizes for this year’s inaugural NFHM prize draw. I’m giving a NFHM talk at the Bribie Island Branch of Moreton Regional Libraries on 30 August and the prize draw will be conducted then with the assistance of library staff. The results will be placed on the NFHM website shortly thereafter.

Not all of our sponsors are commercial businesses and therefore don’t have prizes to donate. We are grateful to the National Archives of Australia for their continuing sponsorship by providing a venue for the launch of NFHM. For the first time the launch is outside of Melbourne and I’m very happy that it is in my home town of Brisbane. As a national event, I like the idea of the NFHM launch moving around to other places, and not necessarily capital cities.

FamilySearch is also a long term sponsor and this year for the first time they have sponsored flying the winners of the Nick Vine Hall awards to Brisbane to receive their awards in person. When I have attended the launch in Melbourne in previous years, I always felt sad that the winners were usually not present due to the tyranny of distance. So it is really good to see FamilySearch sponsor this important part of NFHM.

Of course it does take some effort and real dollars to administer NFHM and this year I have tried to operate on a $0 budget with administrative support from my own part time research and consultancy business, Shauna Hicks History Enterprises (that’s the SHHE logo if anyone has been wondering what it was). I’m happy to say that real costs have been limited as I have tried to do everything via email and social media, avoiding the heavy cost of printing and postage. Organisations have been asked to print out the poster themselves and to organise their own publicity materials and everyone has been happy to do this.

I have also called on my own network of social media cyber buddies and we have been very active on Twitter, Facebook, You Tube, Google + and our own personal blogs and I thank them all for their ongoing support. All of our sponsors have actively promoted NFHM through their e-newsletters, magazines, social media and websites. There has even been some radio and newspaper interest and I expect that to continue throughout the month.

Of course not everyone will be able to attend a NFHM event in person as there may not be an event near them or they have to work, look after children, aged parents or whatever reason. In another first I have devised a list of 31 activities for researchers to undertake during the month and they can do as many or as few activities as they choose. I have also done a list of 31 activities for genealogy and family history societies which might help them promote their events more and perhaps even gain them some new members. Both lists can be found on the Resources page of my website.

Finally, there are many people I would like to thank but it would take far too long but they know who they are and I look forward to chatting to them via social media throughout August. I do however want to mention three people who have set a record this NFHM. First is my friend and colleague Seonaid Lewis from Auckland City Libraries in New Zealand who has organised a staggering 71 events for August and I will confess that I’ve only put a few of them up on the website. Back here in Australia the record for number of events goes to my Victorian friend and colleague Liz Pidgeon from Yarra Plenty Regional Library for organising 13 events. Lastly, but by no means least, Caitlin Gow a young Brisbane genealogist for doing what I believe is the first ever NFHM You Tube video promotion. If you browse the events listed in all the States and Territories, you will be simply amazed at the wide range of great events , most of which are free.

So it looks like NFHM 2013 is going to be a fantastic month!