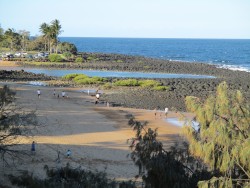 A week’s holiday (and I actually did no work, blogging, writing or anything much else) at lovely Bargara near Bundaberg. Max has a 94 year old aunt that we like visiting – she has some great memories and stories of his mother’s family. We also spent some time with her youngest son.

As Bundaberg is only about 4 hours from Rockhampton it was a great opportunity to present an afternoon of talks to the Central Queensland Family History Association. For a report of the seminar see my Diary of an Australian Genealogist – Genealogy Notes 28 Oct – 11 Nov 2015.

We spent the next day looking around Rockhampton, Max was last there with the army in 1968, and we also went down to Yeppoon and Emu Park. As we didn’t want to travel back home the same way, we decided to do a leisurely trip down the Burnett Highway. There wasn’t a great lot of traffic so not a lot of tourists which is a shame as there is so much history along this highway.

Our first stop was Mount Morgan and who could go past such an historic cemetery. We could have spent hours there but we had to keep moving. Our next stop was Biloela for a fantastic, late almost lunch breakfast – bacon always tastes better in the country. At Mulgildie Max became acquainted with the local bunyip and I hadn’t realised the legend was from the Mulgildie area. 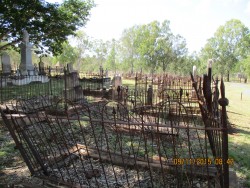 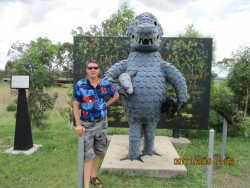 Max meets the Bunyip at Mulgildie

In Goomeri (home of the Pumpkin festival) we had to stop at the visitor’s centre for some maps and info on local sights. The volunteers were so friendly and they have a great local history display including some photos of original settlers.

At Eidsvold we stopped to take a photo of the police station as Max had stopped there on his 1968 trip north to catch up with his uncle who was the police sergeant there at the time. I was a bit surprised to see the local policeman come out (in full gear with gun and taser) to see what we were doing and why, but I suppose it is not often that someone says I was here 47 years ago! He directed us to a very nice coffee shop for afternoon tea.

Back on the road we headed to Gayndah where we caught up with Max’s half brother who he had never ever met. A long story, perhaps another time, and our trip was fast becoming a family history trip with absolutely no pre planning. Our local steak dinner that night was one of the best and cheapest steaks I have had in a long time and the  trip could even be seen as a gourmet excursion as we sampled local produce including wines. 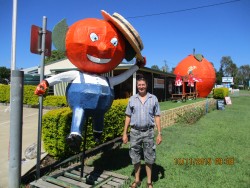 Max at the Big Orange, Gayndah

We simply had to have breakfast at the Big Orange on the way out of Gayndah next morning. A fascinating store with lots of local produce, arts and crafts and great food. Max got to meet another one of the locals!

Gayndah claims to be the oldest town in Queensland having been established in 1849 but next day we drove into Nanango which also claims oldest with an 1848 date. Either way there are some really old places and streetscapes, as in most of the towns we drove through. Original miners cottages, old Queenslanders and farm buildings all with so much history. There were lots we would have liked to stop and look through but people still live in them.

The Peanut Van in Nanango beckoned us and you really can’t go past local peanuts and there were dozens of sweet and savoury flavours. Picking two was a bit hard (all things in moderation they say) and the peanut brittle is to die for. Not to hard, not to soft, just perfect. Then it was a quick detour into Lake Barambah (Bjelke Petersen Dam) to check out the fishing and boating ramps. Always a good sign when there are people cleaning nice sized fish when you pull up but really the huge flock of pelicans waiting for the scraps was the giveaway.

After that it was relatively familiar territory travelling through Kilcoy and of course we had to stop at Yowie Park and have a fantastic pie from the best ever bakery just across the road from the park. Sitting there watching all the bird life is a wonderful experience in itself. From there it was through Woodford, skirting Caboolture before we were back on the Bribie Island Road.

Had we a few extra days we would have detoured into Kingaroy and up into the Bunya Mountains. Maybe next time. A great trip with aspects of family history, heritage, gourmet foods and fantastic scenery. I wonder sometimes why people don’t holiday more out west, the coast and the beaches are great but so much more to see travelling our highways.