It was a privilege to be part of this well organised and interesting three day genealogy event as part of National Family History Month in New Zealand. Auckland Libraries and the Genealogical Computer Group of the New Zealand Society of Genealogists jointly planned and managed the event. It was free except for the Friday night where the entry fee went towards the catering costs. There were a range of cafes and shops near the venue and the organisers also arranged for a food caravan to be onsite for coffee, cakes and light lunches. All of the talks were available on a USB stick for a modest $2 so I can see some of the talks I missed. In addition to the USB, I have my talks on the Resources page of my website, scroll down to Presentations.

Friday night was a welcome event with some yummy finger food, tea/coffee and juice as people arrived and mingled. There were two talks for the evening but before they got underway, I was pleased to present to the New Zealand Society of Genealogists the Nick Vine Hall Award for 2016 for their August 2015 journal . The Society received a plaque accepted by the President and the editor a certificate. Of course there was the obligatory happy snap. Then it was down to the serious business of talks.

Dick Eastman from the US (perhaps best known for his free daily online genealogy newsletter) was first with a look at the genealogy world in 10 years time. Given the rate of technological change that’s not easy, but Dick also gave us a look at the past and the present. Fascinating. The second speaker was myself with an abbreviated version of my Love Sex and Damn Lies talk. After my session a number of people also spoke about their experiences and surprises following DNA tests.

The Saturday was incredible with over 500 people visiting the expo and listening to talks. There were lots of exhibitors including the National Archives of New Zealand, the National Library of New Zealand, Auckland Libraries, Auckland War Memorial Museum, the New Zealand Society of Genealogists and all of their special interest groups, Beehive Books,  Guild of One Name Studies, FamilySearch, Ancestry, Findmypast and the New Zealand Fencible Society.  So there was lots to see and many willing volunteers to answer questions.

There were 3 or 4 concurrent sessions throughout the day and I gave two talks on demolishing brick walls and what was the voyage like. I also went to Dick Eastman’s two talks on being an organised genealogist and the latest preservation technology. I also managed to catch Fiona Brooker’s talk on Findmypast. I missed talks on Ancestry, FamilySearch, one name studies, aliens in New Zealand and sessions on Maori, Pacific Island and Indian genealogy. It was a full on day as lots of people also had questions for me on Australian genealogy. I did manage to get out to the food caravan for a nice latte and ham and brie croissant.

The Sunday was not as popular with only about 300 people there (still quite a lot and it was another full on day). This time I did talks on it’s not all online and archives you should know about. During my first talk the burglar alarm was somehow triggered and once we realised it wasn’t a fire alarm we all went back inside. It was a bit hard trying to finish my talk over the noise of the alarm. Again I went to Dick Eastman’s talks on genealogy in the cloud and going nearly paperless. Some great tips and everyone has to start somewhere so why not today and don’t tackle the backlog all in one go. Slow and steady. I also attended Jan Gow’s talk on The Genealogist, Robyn Williams on the NZSG library gems and Robert Barnes on Famnet, a website for people tracing Kiwi ancestors.

I missed talks on Scottish resources in Auckland Libraries, Papers Past, Alexander Turnbull and National Library family history resources, Chinese in New Zealand, Ancestry and DNA, the NZ Fencible Corps and the Mount Roskill early settlers database. I still have to go through most of the talks on the USB but it is never quite the same as you miss all of the dialogue and additional comments. Still better than totally missing out.

Whenever I attend expos I always buy raffle tickets to support the organisers but I never really win anything. Perhaps I need t

o go to New Zealand more often, I won a 12 month World subscription to Findmypast which was really good and I won second prize in the NZSG Irish group’s raffle which was a basket of goodies including an Irish coffee cup, some coffee and chocolates and lots of information on Ireland and Irish research. Totally thrilled with all my wins and I received lots of nice feedback on my talks.

The Fickling Convention Centre was a great venue with lots of rooms and parking which is just as well given the numbers who turned up over the two days. All the sessions were kept to time and it was easy to see slides and to hear the speakers. Perhaps my only grumble would be that the Centre could do with a few more Ladies toilets, or perhaps I was just unlucky to always find a queue.

Dick Eastman and myself also gave a talk each to attendees at an afternoon seminar at Auckland Library on the Monday. Dick’s talks was on using Google for genealogy and I looked at skeletons in the family using asylum and prison records. I think there were about 50 people and the sessions were followed by an excellent afternoon tea and chat. 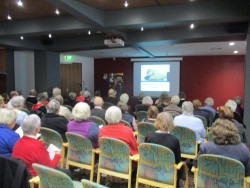 It was an extremely busy long weekend but I am glad to have been part of such a well organised genealogy event. It was also good to catch up with Dick Eastman again, having first heard him speak at the AFFHO Congress in Auckland in 2009. It was about then that I also made the acquaintance of the family history team at Auckland Library, although we had met up virtually before then on social media. While we can do a lot online at home, I still think you learn more by attending in person events like this. Well done Auckland Libraries and the New Zealand Society of Genealogists computer group.

We use cookies to ensure that we give you the best experience on our website. If you continue to use this site we will assume that you are happy with it.OkPrivacy policy