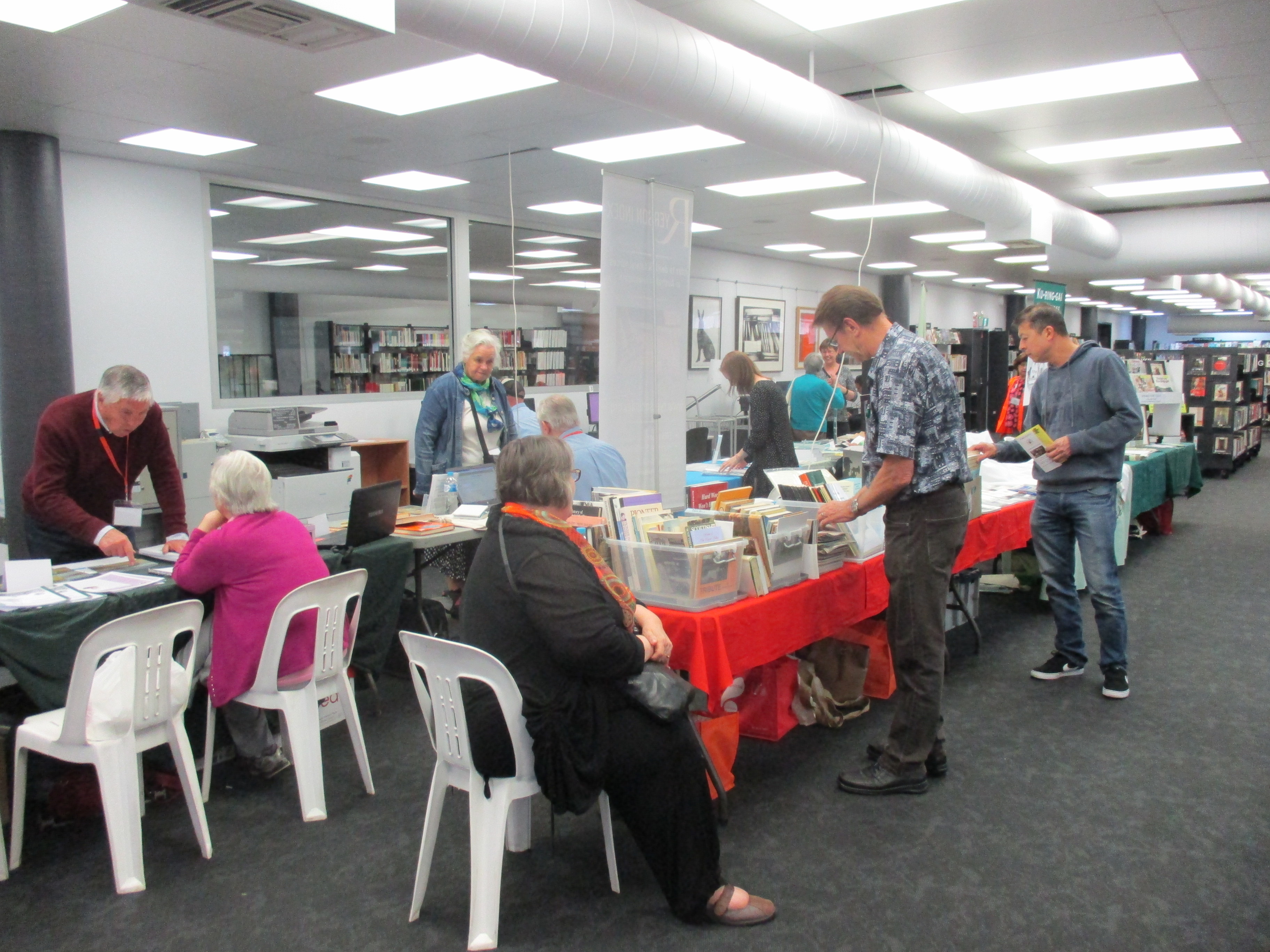 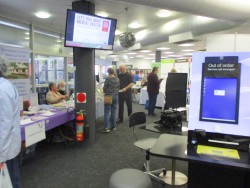 Exhibitors in the library stacks

Each year the NSW & ACT Association of Family History Organisations holds an annual conference and this year it was in Orange, NSW in September 2017. With the theme of Your Family Story: Telling, Recording & Preserving it was always going to be a conference to appeal to genealogy and family history enthusiasts.

However, I think just about everyone was amazed to find that there were 345 delegates and Orange is not the easiest place to get to if you are travelling any distance. We drove down and while a long two day trek each way, it was definitely worth it and it was great to see other Queenslanders (Brisbane, Gold Coast and Sunshine Coast) there as well as lots of friends from various NSW & ACT societies.

The conference started on Thursday evening with a welcome reception at the Orange Regional Gallery where there were some tasty nibbles and drinks. The Mayor seemed really pleased to be part of the proceedings and even responded to questions about the main street roundabouts – all designed to keep the traffic flowing freely but not so friendly to those who want to cross the road and may not be so quick on their feet. It was really good to see the Council’s support for the conference and with 345 delegates, most of whom were not local residents, this must have been a boon for local businesses over the four days. 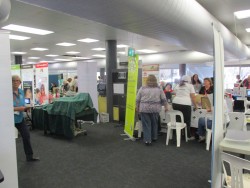 More exhibitors in the library stacks

Friday was the free family history fair which was open to the public as well as delegates and this took place inside the Orange City Library (a member of Central West Libraries), again a wonderful use of a public space. Most exhibitors were ‘camped’ in the library over the three days and were busy every time I popped my head in. Although I went with my usual, ‘no I am not buying any books’, I still managed to come out with five, one new and four secondhand. Who can resist a bargain? Working my way around the exhibitors was slow as it was also an opportunity to catch up with friends staffing the displays. I counted 40 exhibitors so I won’t list them all here but they were a mix of genealogy type businesses and genealogy/family history societies so something for everyone. 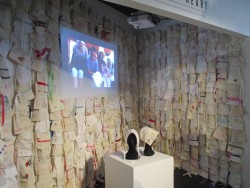 Saturday was the first day of the conference and started with Christina Henri talking about her Roses from the Heart (bonnets representing each of the convict women transported to Australia) project and there was a corresponding display in the Orange Regional Museum which was just next door to the Orange Civic Theatre and the Orange City Library. This was a great feature of the conference in that everything was close by and within easy walking distance. William Yang was next and he grew up in North Queensland and is of Chinese descent. Many of the things he said about telling family stories really hit home to me personally, especially how to deal with family secrets, to tell or not to tell. Great sessions.

Morning tea was excellent (country baking at its best) although the line up for the tea/coffee was a bit lengthy and you were better off just going for the water option. I actually dashed across to the Museum to see Christina Henri at her display of bonnets and so did quite a few others. The food was so plentiful there was still some left when I dashed back for the next sessions.

Gail Davis, a favourite presenter from State Archives & Records NSW spoke about their latest exhibition Captured: Portraits of Crime 1870-1930. The title of her talk was Gaolbird Ancestors and as usual, it contained lots of hints on how to find naughty ancestors. Gail’s display table was kept busy during the breaks too with people keen to use archives to find their family stories. Jacqui Newling, a colonial gastronomer with Sydney Living Museums was next talking about telling the family story through food and I often think about what my ancestors ate for breakfast or their evening meals. Now I can learn more by following The Cook and The Curator: Eat Your History blog.

After all that talk of food it was time for lunch which was a boxed sandwich set with a yummy caramel slice although I did see some people with chocolate slices. There was also a fruit juice or tea and coffee if you wanted. It was a lovely fine day and people took the opportunity to sit outside in the courtyard as well as the tables and chairs provided outside the Library. There was also time to visit the exhibitors or check out the Museum or simply chat with friends.

Margot Riley, cultural historian with State Library of NSW, kept us all awake after lunch with her talk on dating Australian portraits and this is not always easy as some times people wore clothes/hats out of fashion or women even kept an out of date hairstyle (I’m guilty of both those things). As usual I was also envious of some of the wonderful photos people have of their ancestors and I just wish I had one, although all those gaol descriptions do help me picture them somewhat! Margot also told us about a new website under development Portrait Detective which has a great timeline. Simply select a date then an image will appear for that time period, at the moment there are 100 images for 200 years. Fascinating to see some of the earlier images. Perry McIntyre followed with a talk on immigration schemes and how it can be difficult to know which ‘Ann Kenny’ is yours. Sometimes the passenger lists simply don’t give enough information to distinguish between people with similar names, ages and ‘from Ireland’. 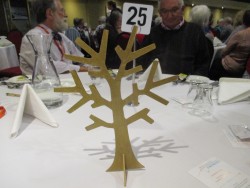 Afternoon tea was again yummy with scones and slices which could be walked off with the Byng Street walk, or you could attend the NSW & ACT Association AGM or simply wander round the exhibitors. But those going to the conference dinner had to be at the local RSL (again located close by and within walking distance) by 6.30pm. The dinner was good but I’m not sure that they really needed the band who were a bit on the loud side. Those up dancing enjoyed it but those just wanting to chat were not so enthused.

Sunday was equally thought provoking with William McInnes (Australian actor and author) asking Why Look Back? and calling on his own family memories. He was humorous but also serious and asked similar questions to William Yang about what to do with all those family secrets. Catherine Bishop, a historian at the University of Sydney, followed talking about business women and how more women were involved in business that we possibly think. She used a case study about the Hydro Majestic Hotel in the Blue Mountains and her book Minding Her Own Business: Colonial Businesswomen in Sydney is one to look out for. 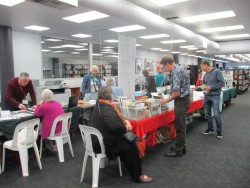 Then another one of those lovely morning teas but as I was presenting next with Weaving Your Story on the Web I took time out to check out the stage and the equipment (but not before grabbing a savoury scone, or was it two). In response to my question who blogs their family stories, very few people put up their hands which still surprises me as it is such a great way of letting people find you on the web and it is free. My presentation is on the Resources page, scroll down to Presentations and it looks at free blogger platforms and gives examples of why blogging is cousin bait.  The last session was Catherine Ziegler from the Noel Butlin Archives Centre in Canberra talking about the Tooth & Co Hotels Project which will be of interest to anyone with hotel licensees in the family.

Then it was all over and next year’s conference will be in Bateman’s Bay, a favourite place from my Canberra days.  The theme is Sailing Into History and it will be held 14-16 September 2018. One to put in the calendar. Sadly I won’t be attending as I have already booked to go on the Unlock the Past Alaska cruise which ends on 14 September. Can’t go to everything.

The Orange conference was a great success in venue, catering, presentations, exhibitors and organisation and conference convenor Jan Richards and her team did a fantastic job. Congratulations to all concerned and enjoy all that spare time you now have! I’m really glad I made the trip and now all I have to do, is start writing more family stories! Thanks everyone.