Each ANZAC Day I like to blog about one of my military ancestors, and this Remembrance Day I have decided to do the same. Neither of my two grandfathers spent much time in military service but their stories are still interesting.

At the outbreak of World War One, Henry as part of the Kennedy Regiment in North Queensland, was mobilised for war service.  In the event of war, it had been previously arranged that the Kennedy Regiment, one of the citizen-force regiments enrolled under the compulsory training scheme, would garrison Thursday Island. Therefore as soon as the news was received, the regiment’s was mobilised. On 8 August 1914 Henry and his regiment (over 1000 men) embarked on the troopship Kanowna at Cairns for Thursday Island.

After reaching Thursday Island safely, a few days later the volunteers were called for ‘for service outside Australia’. The Defence Act provided that no citizen forces could be sent outside the Commonwealth without their consent, hence the ‘call for service’.  About 500 of the men volunteered including Henry Price and they were then sent on to Port Moresby on 16 August 1914 on board the Kanowna where they were to take part in the capture of German New Guinea.

On 4 September 1914 the Kennedy Regiment met Colonel William Holmes who was based in Port Moresby to prepare the task force to attack German New Guinea. Henry joined the Australian Naval and Military Expeditionary Force on 6 September 1914.

Holmes had been expecting mature, trained well-equipped soldiers. Unfortunately he was disappointed for a number of reasons.  Firstly, the Kennedy troops were mainly young men aged between 18 and 20 years old.  The Regiment had been mobilised quickly, without proper medical inspection and consisted of both trainees under the compulsory scheme (some of whom were not yet 18) and middle-aged members of local rifle clubs.

Secondly, the  new arrivals had very little gear with them and to fight in the tropics soldiers needed mosquito nets, good boots, hammocks and suitable uniforms. There had been no time to provision the Kanowna for a long voyage and she quickly ran out of stores and was given extra stores from the Sydney.

A third factor that upset Holmes was that the Kanowna’s crew were considering mutiny as most of its members had  been shanghaied into service and were not volunteers.  Without the Kanowna, there was no way of getting the Kennedy Regiment from Port Moresby to the attack area.

For these reasons Holmes wanted to send the Kennedy Regiment and the Kanowna back to Queensland.  However, he could not do this without higher authority and before this could be arranged, Holmes was ordered to send his troops off to battle.  On 7 September 1914 the cruisers Sydney and Encounter, the auxiliary cruiser Berrima, destroyers Warrego and Yarra, submarines AE1 and AE2, the supply ship Aorangi, the Parramatta, the Koolonga, the oil tanker Murex and the Kanowna steamed out of Port Moresby.

However, just outside the harbour the Kanowna slewed sideways and halted.  The firemen had stopped stoking the engines and insisted that they would not start again until the ship was going home to Queensland.  The soldiers declared they would stoke the engines but were overruled and the Kanowna was ordered back to Townsville.

Colonel Holmes reported ‘I consider the Kanowna detachment, as at present constituted and equipped, unfit for immediate service and, in view of today’s events …. recommend disbandment’. The Kanowna arrived back in Townsville on 18 September 1914 and the Kennedy troops, including Henry Price, were discharged on the same day. 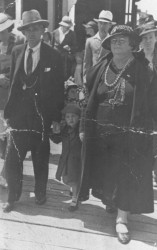 The majority of the Kennedy Regiment then rushed to volunteer for the 1st AIF and subsequently became the backbone of the 15th Battalion at Gallipoli which went in with 1000 men but sadly, within just a few short weeks came out with only 350 men.

Henry Price did not re-enlist following the abortive campaign on the Kanowna.  For his brief part in the war effort, Henry received the British War Medal.  This simple silver medal was issued singly without the Victory Medal 1914-18 to certain personnel who did not actually serve in the theatre of war. The family story that he participated in the capture of German New Guinea was not quite accurate.

Had Henry re-enlisted, he would have gone to Gallipoli and perhaps this story may not have been written as only three of his ten children had been born at the outbreak of  World War One. The photo to the right shows Henry and my grandmother Alice and their daughter (my mother) shortly before his death in 1938.

John Martin Gunderson
Jack, as he was more commonly known, enlisted in the Australian Army on 27 August 1941 in Brisbane and was discharged two years later as a Sapper with the 2/3 Field Squadron on 27 October 1943.

Aged 32 years when he enlisted, Jack’s health was an issue and he served at various places in Australia including Redbank in Queensland, Bonegilla in Victoria and Northam in Western Australia before he was declared medically unfit and discharged.

Although he never saw military service outside of Australia, he received the War Medal 1939-45 and the Australian Service Medal 1939-45.  The photo above shows Jack in his army uniform with my grandmother Kathleen and my father.