This is the 10th Unlock the Past genealogy cruise and I am excited to be on this one because I have been wanting to hear Judy Russell, The Legal Genealogist in person for some time. Plus there is a variety of other fantastic speakers covering a wide range of topics. It is an 18 night cruise around New Zealand then across to Sydney and then over to Fremantle via Melbourne and Adelaide.

We flew into Auckland late Friday afternoon and stayed at the Kiwi International Hotel for two nights before joining the cruise on board the Celebrity Solstice on 14 February, Valentine’s Day. Check in was quick and easy and luggage delivered in time to unpack before dinner. We collected our registration kit from the conference room, explored the ship and met our dinner companions at 6.00pm. Staff presented all the ladies with a beautiful red rose. After dinner there was a meet and greet in the Celebrity Theatre and then most of us went to our cabins for an early night. The time difference of three hours takes a bit of getting used to for non daylight saving people!

Day 2 was in the Bay of Islands and we had to take the tender ashore and then a friendly, free shuttle drove us down to the local town of Paihia. We stayed there a few years ago and the motel was still there and looked totally unchanged. A walk around the town, a slower walk through all the local market stalls (set up whenever a ship visits),  a real coffee and then the shuttle back to the wharf and a 25 minute tender ride back to the ship.

The after dinner speaker was Judy Russell, the Legal Genealogist and to start the conference off on a serious note the topic was all about copyright. Judy made some interesting comparisons of how copyright differs in the US to the Commonwealth and  gave some practical examples of what is copyright and when and how it can be used.  Not an easy subject but one we all need to be aware of. 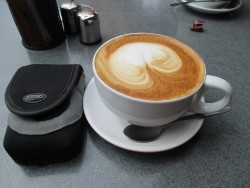 Big cup of coffee in Tauranga

Day 3 was again in port. This time in Tauranga, another place we were familiar with having stayed there before. So a leisurely stroll around the shops, another coffee in an incredibly big cup and a short walk back to the ship. The after dinner speaker was Paul Blake on using English probate records to find information on emigrant ancestors.

Day 4 was our first full day at sea so a program of talks from 9.00am onwards. Geoff Doherty started the day with his talk on Joseph Dunn who seems to have been a fascinating character he discovered in a Premier’s Department correspondence file while doing research on the Boer War. Dunn sounds like he could be the subject of a novel or perhaps even a movie and given his exploits in the 1890s and early 1900s we should never assume that our ancestors did not move around.

Louis Kessler was the next speaker on looking at research from a resource perspective rather than a person perspective. Look for all examples of the surname when using a particular resource as they may all end up relevant. If you are only looking for one name you may miss other relevant names. Of course this is all only possible now with the mega databases online and the Internet.

The next talk I went to was Judy Russell on The Common Poor: Transported, Indentured, Enslaved which focussed on record sources to find people who were poor and not easily or always found in official records. As Judy’s talk progressed it was obvious that if you think laterally there are lots of records that can be used including bankruptcy, prison and court records, insanity and lunacy petitions,  military records or adultery and bastardy records.

I had two people who wanted my advice in the Research Help Zone, both with tricky families. At least on a cruise of this length you can give them some ‘homework’ and then follow up to see if they can answer your questions. Sometimes brick walls can be approached by asking different questions.

The after dinner speaker was me and my talk on Love Sex and Damn Lies was well received and many were a bit shocked by my foray into the world of DNA and what it revealed on my family. I’m not surprised as I am still a bit shocked too but until I have done more follow up testing I am not going to write too much about it. The surprising thing was how many people have similar experiences. 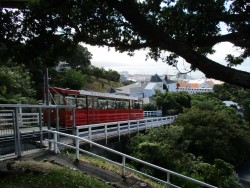 Day 5 was in Wellington and we have spent some time there in the past. A favourite is the Cable Car so we joined the queue for tickets and after about 45 minutes we found ourselves overlooking Wellington. New since our last visit is the Museum which was interesting and I personally found the DVD footage of New Zealand’s early trams and private cable cars totally fascinating.

The after dinner speaking was Helen Smith on the Health of the ANZACS in the Great War. Helen managed to include a lot of information into a very short space of time but then she talks fast too. It was interesting to hear about the difficulties facing the wounded and the sick and the medical staff trying to look after them. A number of our family members were killed or wounded and Helen’s talk made us realise just how the physical environment at Gallipoli and the Western Front made it harder for the wounded and those trying to save them.

Day 6 was in Akaroa on the South Island and it is where we first discovered our love of seafood chowder. It is a pretty little spot that was first settled by the French and we spent a few hours wandering around the streets looking at some of the original cottages. The English cottage gardens were stunning and I have developed a new appreciation of the humble geranium.

Paul Blake was the after dinner speaker on Finding Your Irish Roots Part 1 which was a general introduction to researching in Ireland but some of what he said could apply to researching anywhere. His message was to try and find as much on your ancestor in their adopted country before trying to find them in Ireland. Running through different resources he touched on naturalisation records and while the Irish did not need to be naturalised in Australia, they did in the United States. Some of my GG grandmother’s siblings went to the US so this is something to follow up when I get home.

The cruise is 18 nights so I will divide this report into three six day reports with an overview report. The first six days went incredibly quickly with so many ports but the genealogy sessions started once we headed back to Australia. I am doing my usual internet free break while overseas and I really do sleep better and longer when not connected everyday. This post is coming from Melbourne and I hope to get the next six days up in Adelaide. Stay tuned.