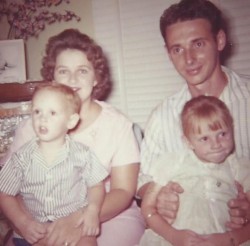 Due to all my travelling around over the last month or so, I have missed a few weeks of the blogging theme 52 Weeks of Personal Genealogy & History. It is an excellent theme to generate personal memories and to then capture them into a regular blog.

This week’s theme is Songs and the question is what was the No 1 song in the year of your birth. The easiest way to find this out is to look at This Day in Music and while the information is not available (for my year) in Australia, I do know that The Green Door by Jim Lowe was No 1 in the USA and Frankie Laine was singing A Woman In Love in the UK.

Some years ago when I was living in Canberra I visited the National Film and Sound Archive and in their shop I purchased a CD with the music for the year of my birth. Artists popular that year were Gene Vincent with Be Bop A Lula, Dean Martin with Memories Are Made of This, Frankie Lymon & The Teenagers with Why Do Fools Fall In Love, Nat King Cole with Too Young To Go Steady and one of my all time favourties Fats Domino singing Blueberry Hill.

There are others on the CD but I won’t bore you by listing them all. Perhaps more amazing is whose not on the CD and that is Elvis Presley. I have always been an Elvis fan and I was led to believe this was because my mother listened to him constantly while pregnant with me (so I was indoctrinated/brainwashed even before I was born – it’s not really my fault).

Heartbreak Hotel did become a No 1 hit in the USA the year I was born, and his first movie Love Me Tender came out in the USA the month I was born but I now doubt whether he was that popular or well known here in Australia during Mum’s pregnancy. Certainly I remember as a small child listening to Love Me Tender (the film album) endlessly so perhaps it is still Mum’s fault that I like Elvis. I can even remember exactly what I was doing when I found out he had died, it’s a bit the same for Princess Diana.

Mum also had Bill Haley & the Comets’ records and other early rock artists so my taste in music (even today) is still very much in the 1950s. As I reached my teens the first album I ever bought for myself was Cosmo’s Factory by Creedence Clearwater Revival (CCR). To this day I still have their records and now CDs and of course everything John Fogerty has produced as a single artist. CCR was one of the first bands I ever saw perform live when they visited Brisbane in the early 70s.

Thinking about that Creedence concert now, it is nearly 40 years ago and that’s a scary thought. There are lots of songs and artists that have made an impact on me over the years but I would have a hard time trying to identify more modern songs and artists. They don’t seem to have the same attraction for me as the music of the 50s to 70s. Do I need to grow up and start living in the modern world of music or is it ok to stay with the decades that gave me most musical pleasure? I’ve always been an independent soul so Elvis has just slipped into the CD drive and I’m off to relive some fond memories!