This is the third post of a series of blog posts on the 10th Unlock the Past cruise to New Zealand and southern Australia through to Fremantle in Western Australia. If you missed Days 1-6, catch up here and Days 7-12 here. 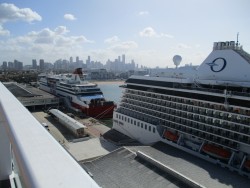 Day 13 was in Melbourne and as we used to live there, I took the opportunity to have a lazy day on the ship with a swim, spa and a bit of reading. The after dinner speaker was Jan Gow looking at FamilySearch. We took the opportunity to visit Silk Harvest, one of the ship’s specialty restaurants and the food was fantastic but way too much.

Day 14 was at sea and a full day of talks with Judy Russell starting with a look at DNA tests and which one is best for different options. I found it helpful and probably need to ask my brother to do another, different test but I will wait and see what the results are from the first test.

Geoff Doherty was next talking about the Boer War and an interesting desertion case that he had come across. Some people do live remarkably complicated lives and it is amazing how much you can find out, even if they are trying to cover their tracks. Geoff also reminded us about the National Archives of Australia’s Soda site which is where you can see newly scanned documents.

Louis Kessler followed talking about how to make the most of your genealogy software with good practical suggestions. Rosemary Kopittke then talked about The Genealogist and what is the difference between other similar databases and after lunch Eric Kopittke spoke about locating a German ancestor’s place of origin in Germany. 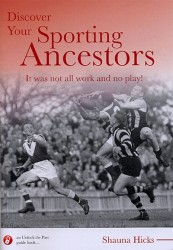 I followed with Sporting Ancestors and everyone does have them. People don’t think of fishing, shooting, croquet, bowls and so on as sports which is why I wrote my research guide on Sporting Ancestors. I have found an amazing amount of new information by looking at things differently.

Paul Blake then spoke about the History of the Photograph which was followed by a Research Help Zone where people can get one on one help with their research. My person had enquiries on four families and I was able to make some suggestions for all of them and I hope she does let me know how it turns out. Some suggestions were long shots but then you never know. The after dinner speaker was Helen Smith on the home front in the Great War.

Day 15 was in Adelaide famous for its churches and Haigh’s chocolates. Fantastic weather in all the Australian ports so far. The after dinner speaker was Louis Kessler talking on Jewish Genealogy. At most conferences I try to attend at least one talk on a topic that I know little, or nothing about and Jewish genealogy was my pick this trip. It was a fascinating look at both the religion and the culture and perhaps a little known fact there were eight Jewish convicts in the First Fleet. Today the Jewish population is about 112,500 with most in Melbourne and Sydney. Louis has some Jewish genealogy links on his website www.lkessler.com/jglinks.shtml

Day 16 was the first of three days at sea so a solid program of talks to finish the cruise. Paul Blake was first with a talk on an English manor and its records which I missed as none of my people were ever associated with a manor. Jan Gow was next with a talk on Scotland’s People which I have used before to find my own Scottish ancestors. Just wish I could get them back another generation. Must have another look.

Louis Kessler followed after a break and did two talks in one session to catch up from when he was ill the other day. The first part was on why names, dates, and places are not enough and how we need to capture stories about our ancestors lives and relationships. Family history over just genealogy but most people I know in Australia are probably doing this anyway. The second part of the talk was why genealogy is everyone’s solemn duty which tied in nicely with the first part. Louis actually gave 24 reasons which I won’t list here but I did like No 22 – clean out your house, put all your genealogy in one pile and then throw out everything else! No 1 was also important, tell your own story too and don’t just think about it, do it.

After lunch Paul Blake was next with London genealogy or the metropolitan nightmare. As someone with London roots I found this talk helped me to really understand how London developed and where the records are held. Knowing where to look is half the battle. While I was familiar with some of the websites and archives he listed, I had forgotten about the Charles Booth Online Archive.  A survey into life and labour in London was transformed into maps of the areas which I must have another look at. London Lives is a favourite of mine and includes eight archives and 15 data sets.

Eric Kopittke was next with Civil Records in Germany so I had a long coffee break to come back for Judy Russell’s fascinating talk on No Vitals? No Problem! Building a family through circumstantial evidence. This was a case study but it showed how small pieces of information discovered from a wide range of other sources can be used. But don’t believe everything and check every data point.

Rosemary Kopittke was next with Electoral Rolls tips and traps and  I have heard this talk before. Lots of great advice for a record source that looks straight forward and it also helps to know when people first got the right to vote, especially women as that varied from state to state. After dinner was Helen Smith talking about how our ancestors died. Always investigate those strange medical terms on death certificates if you are not sure what they mean.

Day 17 started with Jan Gow helping us to plan for a research trip. All of Jan’s talks tied in together and it is easy to see how well prepared she is before any trip. Eric Kopittke followed with German church archives so I had an early coffee break.

Helen Smith’s Ask Grandma before it is too late was full of good hints on interviewing people and how to get them to tell you the stories by keeping them relaxed, comfortable and not interrupting their flow of thoughts. I particularly liked her FAN concept for those with no one left. Friends. Associates. Neighbours. No one lives in a vacuum but remember that people’s memories are fallible.

Jan Gow followed with her check list for the Big 5 for UK Research – Census, Civil Registration, FamilySearch, Surname Interests and WWW. Jan’s working sheets include every variation so she knows exactly what she has looked at for each person/family. Even with the WWW Jan has a range of search engines she uses where as I tend to often just use Google. I will have to look at yippy, trovando.it, gigablast, ask, altavista and geneanet, some I have heard of but others are new.

Paul Blake’s Crime Criminals and Punishment in England was relevant for anyone with convicts and his explanation of the various courts was useful. It was also good how he said what was in Ancestry or Findmypast and how the two differ and you really need to check both. Rosemary Kopittke then gave an introduction to Family Historian and as I had attended Jane Taubman’s talks on it during the Baltic cruise I had another little coffee break in preparation for Judy Russell’s Shootout at the Rhododendron Lodge: reconstructing life changing events.

This was another case study and it showed how the various players came to be at that point in time when the shootout occurred and what the devastating aftermath was for the families of all those involved. Newspapers may give the broad story but you also need to go to the original court and police records . You also need to be aware of any ethical constraints especially if living people are involved. 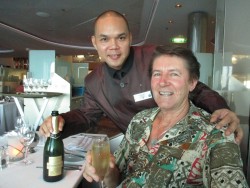 The after dinner speaker was Eric Kopittke on reading and interpreting records from Germany. We went to another one of the ship’s specialty restaurants as tomorrow is Max’s birthday.

Day 18 and the last day of the cruise with a full program of talks. Diane Foster was first with photo preservation and it was good to see that Diane brought along some sample products so that people could see what she was talking about.  Albox and Archival Survival are two suppliers that Diane mentioned.

Helen Smith was next with Genealogical Learning from Home and it is really amazing how many options there are to learn more at home. Magazines, books, societies, wikis, webinars, blogs, podcasts, YouTube and more formal courses for online study. Helen’s tip was to set up an education plan and try and do at least one thing a month eg listen to a webinar, schedule a cruise (definitely learn a lot with a genealogy cruise), attend a monthly family history meeting or go to a seminar.

My talk on Education Records was after the break then Jan Gow with Sight, Site and Cite and why these are all important to do. We got another look at some of those other search engines I mentioned from her earlier talk and she added FamNet, Mamma and Yahoo. Louis Kessler followed with Using Dates Effectively and the need to use standard date formats.  He finished with six predictions on the future of genealogy which was interesting. Not surprisingly most were online related but I did like his My Data My Research, keeping your own research separate from what is online and don’t sync with other people’s research . His last prediction was to do with Genetics and DNA which will see more people testing and connecting up or discovering surprises.

Marg Doherty was after the break with Australian Women and the Professions which was a wide ranging talk looking at nurses, teachers and women in business. The difficulties married women faced was easily seen by some of the other quotes Marg used – should be minding their husbands, homes and children! Paul Blake finished the day session with a talk on the history of the tithe. 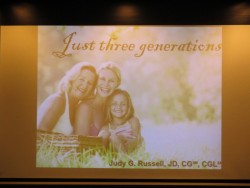 After dinner Judy Russell gave a brief, but thought provoking  talk Just Three Generations which is how long it takes for someone’s memories to be forgotten if not recorded. A great way to end the program. Then it was the prize draw and there were many excited winners. Photographs followed and then it was off to put our suitcases outside the door in preparation for departure in Fremantle.

Day 19 was an early start to the day as the ship tries to get everyone off early in preparation for the next load of cruisers. Due to a mix up we were sent to the wrong place to get our city shuttle and Celebrity put us into a taxi for the inconvenience and delay. We had a couple of days in Perth, bumped into Louis Kessler and his wife and also Paul Blake. Caught up with an old RAAF friend of Max’s for a few beers and then it was the long trek home.

As usual all of my talks are available on the Resources page of my website.

I will do an overall review of the cruise next. Stay tuned.