World War One and The Finn Brothers – Trove Tuesday Blog 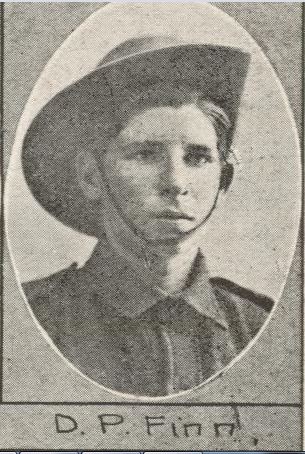 I have previously written about my three Finn great great uncles who fought in World War One. Read their story here.

Last year I managed to find a photograph of Denis Finn courtesy of Trove but I had no luck finding photos of his brothers John and Robert. Today I had another look in Trove and came up with this amazing article of all three brothers in The Week, 31 Jan 1919. The caption even tells me that they are the sons of John Finn, my great great grandfather so there is no doubt about who they are.

Not the best photos as it is not a good newspaper copy, but as I don’t have any photos of John and Robert Finn I am totally thrilled. It is a different photo of Denis Finn, he appears older than the photo that appeared in The Queenslander 8 Jan 1916 when he first enlisted.

The caption for Robert Finn states on active service for 2 years and 5 months.

The caption for John Finn states on active service for 2 years and 3 months.

The caption for Denis Finn reads – Wounded and taken prisoner at Mouquet Farm in France in August 1916; now in England. The foregoing are three sons of Mr John Finn of Brisbane.

Another fantastic find in Trove.