The Search for Henry Spencer 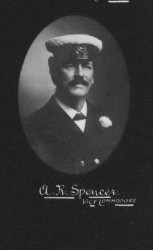 I first wrote this blog post on 7 Sep 2010 for another website and have now decided to also put it on my own website with the rest of the posts on the Spencer family. In the last paragraph below, I talked about how we hoped to find some long lost cousins and reconnect the different Spencer families.

In the last six years we have done exactly that and learnt a lot more about Henry’s descendants from his first two marriages. We still don’t have a photograph of him but we have two photos of his brother Adkins Robert Spencer and one of them looks remarkably like Max! Even one of his distant Spencer cousins looks like him. Definitely worth trying to trace descendants on collateral lines.

Here is the original story of how we broke down the brick wall hiding Henry Spencer.

My partner Max’s grandfather was a real mystery man. Unfortunately Max’s father knew very little about his father so we only had vague family stories to follow.

What we did know was that Max’s grandfather, Henry Spencer was from West Bromwich in Staffordshire and it was relatively easy to identify him and his parents and siblings in English census records and to trace them further back. Where we had a brick wall was how and when Henry came to Australia and where he died.

We  first found Henry Spencer in Tasmania, a widower and upholsterer. He met Ada Barwick (nee Jarvis), widowed in 1905 with two young sons living in Richmond, Tasmania. How they met is not known but they had a son Frederick Leo Spencer in 1909 in Deloraine, Tasmania and at some point and for reasons again unknown, they left Tasmania for South Australia. All of Ada’s Jarvis family were in Tasmania and even more surprising, she left her two sons from her first marriage behind in Tasmania.

Henry and Ada finally married in Gladstone, South Australia in 1914 and Max’s father Charles Douglas Spencer was born in 1917 in New Mecklenberg, South Australia. Henry was 23 years older than Ada and the family story is that she met another younger man, an ex soldier Frank Palmer and ran off with him and her two sons Frederick and Charles. Apparently Frank and Ada moved around a lot so that Henry could not find them. It was believed that Henry had either died in South Australia or had gone back home to England.

The Spencer home in South Australia, image from the family collection

A search of deaths in South Australia was unsuccessful as was a search in Tasmania in case Henry had gone back there. Victoria was also checked as it was close to both South Australia and Tasmania. Nothing was known of Henry’s previous wife or if there were any other children from his first marriage. Henry Spencer is a fairly common name and without the name of his previous wife it was very hard to get a lead on him. It wasn’t even known if this family had been in England or Australia.

With the release of Ancestry.com.au‘s Australian BDM indices, I searched for Henry Spencer in case I had missed him on the microfiche indexes when I searched for him previously. Much to my surprise there was a reference to a Henry Spencer with the right parents’ names only it was in Queensland. Why was Henry in Queensland? We had no idea and quickly sent off for the death certificate. We also checked the Brisbane City Council Grave Location database to see if he was buried in Brisbane. Again a successful hit showing he was buried in Toowong cemetery by himself. I then checked FindMyPast.com.au as monumental inscriptions for Toowong cemetery are available on this site. However, there was no tombstone for him.

The death certificate finally arrived and imagine our surprise when we found that Henry had two previous wives and children with both of them. Yet his third wife Ada and family had no knowledge or details of these two earlier families. Interestingly a daughter from the first marriage, Mary Meyer, was the informant and she knew the details of all wives and children from the first two marriages but for number three, she simply put question marks. So either Henry never told his daughter about his third wife and two sons or she declined to put them in.

We are now in the process of trying to learn more about Henry’s other two families and hopefully, locate some distant cousins and one of them will have a photograph of Henry as we don’t even know what he looked like. Sometimes just one missing piece of information needs to turn up and a brick wall will tumble down. Now all we have to do is follow the new leads!