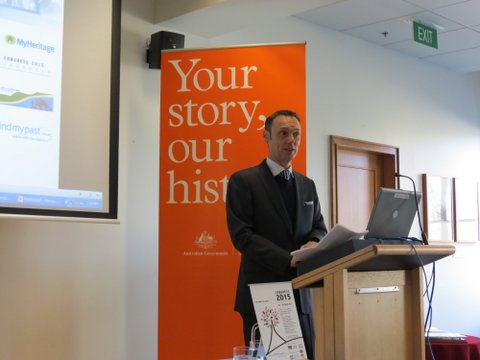 National Family History Month was launched at the National Archives of Australia in Canberra on 1 August 2014. An approaching cold front promised snow and we were not disappointed with a bit of a flurry during the afternoon (confirmed in the Canberra Times the following day as it did not last all that long). However it was lovely and warm inside the heritage building that the National Archives of Australia proudly occupies.

As voluntary coordinator of NFHM, I explained that it was an initiative of AFFHO, the Australasian Federation of  Family History Organisations, a not for profit organisation. NFHM began as a week in 2006 and expanded to the whole month of August from 2013. It is a time when genealogy and family history societies, archives, libraries and other organisations host a variety of activities and events celebrating all aspects of genealogy and family history. There are hundreds of events across every State and Territory of Australia and even an online events category this year. View the web calendar here.

The major sponsors this year are Ancestry.com.au, FamilySearch and MyHeritage with a number of prize sponsors as you can see on the launch screen. Without the sponsors AFFHO would not be able to continue to host this annual feast of family history. View the prize sponsors here. 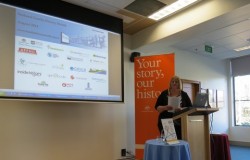 Another major sponsor is the National Archives of Australia who have generously sponsored the launch of NFHM every year since 2006 in Melbourne, Brisbane and this year in Canberra. I then handed over to the Director-General of the National Archives, Mr David Fricker who officially welcomed the guests and acknowledged the traditional custodians of the land on which we met and paid his respects to their Elders, past and present. David then gave a short speech which I think was very relevant and I have gained permission to include it here .

In doing so [the traditional welcome], I am again reminded about the breadth of the National Archives collection. Our Melbourne Office holds Victorian records dating from 1860, includingrecords on Indigenous people in Victoria when the Victorian government handed the responsibility for Aboriginal affairs and associated records to the Commonwealth government in 1975.

Records on Indigenous people in the Northern Territory are also held because the Commonwealth administered the Territory from 1911 until self-government was reached in 1978..We also hold records of Indigenous servicemen whose loyal service during World War I has been largely ignored over the past 100 years. A number of Archives Centenary of Anzac projects, including the Serving our Country: a his 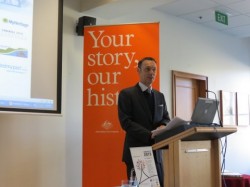 tory of Aboriginal and Torres Strait Islanders in Defence research project which is being actively supported by Archives, will help to highlight their contribution – through research, academic papers and an Archives’ exhibition.

The records that we hold are vast yet it is only the most valuable records created by Australian Government agencies that become part of the national archival collection. And at the heart of the collection are records of intrinsic value concentrating on family history.

Today our focus is on records that might relate to Australian families. Screen shot of the Archives’ Family History page on the website.

This part of our website has been made specifically for genealogists or those with an interest in finding out about their family’s history. The various links take researchers to different pages to help family historians start their research with us. We help researchers by helping them know what we hold and then how to access the material.

Family history is big – Archives committed to access to collection

Family history is the second biggest subject on the web with sites receiving billions of hits per year.

The National Archives is keen to engage independent family historians as well as the quarter of a million or so Australians who are members of family history related organisations. This is why we continue to explore new ways to make our collection accessible to the Australian community.

Whether it be partnering with Ancestry.com in a project that helped to index and digitise Freemantle Passenger lists between 1897 – 1963; adding some 3.6 million names from 17,000 lists to our searchable collection or, launching Destination Australia, a website hosting original migration photos and community contributed stories about migrant experiences which will enrich the Archives’ forthcoming blockbuster exhibition A Ticket to Paradise?  This major national touring exhibition will explore the policies, promotional campaigns, impact and contribution of migration, as well as capturing the individual stories of post WWII migrants that have contributed to the social and cultural fabric of a modern Australia.

The Archives understands the importance of our collection to the Australian community.

This is why working with the Australasian Federation of Family History Organisations through its annual program, National Family History Month is one way that we can support the pursuit of family research. Since 2006 the National Archives has been proud to host the launch at one of its state offices around the nation.

This year we’re very pleased to present, in conjunction with Archives New Zealand, a new website, Discovering Anzacs to be officially launched a little later this year by the Governor General. It provides easy access to both nations’ early service records.

Essentially Discovering Anzacs will have a unique profile of every Anzac who enlisted in World War I, linked to their service record. Family historians can help tell the story of Australia and New Zealand during the war by building on profiles and adding their own family stories, photos or details of their service.

In 2008, we provided online access to Australian service records, through Mapping our Anzacs, which allowed users to search for towns and suburbs where diggers were born or enlisted.

Mapping our Anzacs was greatly loved by the public, with thousands of contributions by individuals who added their own photographs and other tributes. Its replacement by Discovering Anzacs offers users a more functional and contemporary experience. As well as the addition of New Zealand service dossiers, it will contain a wider range of other records from the period – including about internment camps, munition factories and the Boer War.

A New API (Application Programming Interface) which drives the backend of this exciting new website has provided us with the capacity to combine our RecordSearch database with this new website, as well as link and partner with many other institutions and community organisations who host valuable information about Australia’s contribution during WWI. Our hope is for the site to be a valuable community resource and window into history of Australia and the impact of war on the home-front.

I encourage each and every one through your organisations and collaborations to promote Discovering Anzacs, so that Australian’s learn about this valuable resource and delve into their family collections to further enrich our understanding of Australia’s military and social history. [End of David Fricker’s speech] 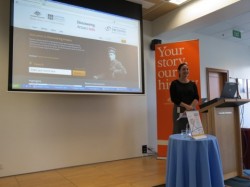 Kate Naughtin then gave a demonstration of the new Discovering ANZACS beta website and highlighted how family historians could transcribe their ancestors documents and add family information. If everyone was to do this then it would make those World War One dossiers even more accessible and not just by the soldier’s name. There are features such as Life Map, Timeline, Images, Stories and Comments. You do need to register and create an account. Kate answered quite a few questions before it was time to move on to the Nick Vine Hall Awards.

Kerrie Gray, President of AFFHO outlined the history of the Awards and that there were 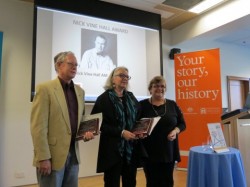 for the best genealogy/family history society journal in two categories – societies with under 500 members and societies with over 500 members. The small society winner was Port Macquarie & Districts Family History Society for their journal Footprints and member Clive Smith was present to accept the awards. The larger society winner was the Australian Institute of Genealogical Studies for their journal The Genealogist and Carolann Thomson Chairman of the Editorial Committee was present to accept the award.  The support of the major sponsors is acknowledged in bringing award winners to the launch.

Next it was the keynote speaker, well known Irish and military historian Dr Richard Rei 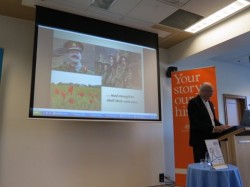 d with a very poignant and moving account of Australians at the Western Front 1914-1918. I would really like to see this presentation available elsewhere as I think others not present at the launch would be interested. So I won’t say anything else about it for now.

Then it was back to me to thank the major sponsors, the prize sponsors and the National Archives of Australia for hosting the launch. Attendees were all given a NAA tote bag with goodies from the National Archives of Australia, FamilySearch and MyHeritage. Then it was time for everyone to enjoy a cuppa and some delicious cakes and biscuits. Judging by the conversations, everyone enjoyed themselves and were looking forward to the rest of National Family History Month.

I would also like to thank Jeanette Hahn for taking the photos used in this blog.