Report on Immigration Seminar Brisbane May 2015

On Sunday I was one of the speakers at a seminar on immigration records organised by the Southern Suburbs Branch of the Genealogical Society of Queensland. Other speakers were Helen Smith, Rosemary Kopittke and Eric Kopittke and I had not heard any of their talks before so it was a great opportunity for me to hear other perspectives on immigration records. It is a pity that the seminar didn’t attract more people as there was lots to learn and the organisers had gone to a lot of effort to arrange four good speakers. Those that were there certainly got a lot out of the day.

First speaker was Helen Smith on They Came From Afar but Did They Stay? which was a wide ranging talk on immigration and why people came out to Australia. Also we have to remember that not everyone stayed and some made return trips home but came back. I liked the way Helen pointed out that if you can’t find them in immigration indexes there are others sources that might give the name of the ship including police gazettes, hospital admission registers, newspapers, inquest records and Helen didn’t mention prison registers but that was how I learnt the name of the ship for one of my families. There was a two page handout.

I was the next speaker on What Was The Voyage Really Like which looks at a number of sources that you can use to build a picture of what the trip out here was like for your ancestors. As usual, my talk is on the Resources page of my website, scroll down to Presentations. I have been giving different versions of that talk for over 30 years and I can still learn something new.

Log of Logs (three volumes) by Ian Nicholson is a great publication to track down shipboard diaries but it was only published in the 1980s and 90s so I have never thought to look for it online because of copyright. However Rosemary commented that it has been digitised and all three volumes are online for ease of access. It was digitised as part of ACRE (Atmospheric Circulations Reconstructions across Earth) a data rescue effort to identify historical weather data sources. Read more about it here and to access the digitised volumes. Every shipboard diary I have read has always mentioned the weather so it makes sense to look at them for historical weather patterns and it’s a bonus for family history.

After lunch Eric Kopittke talked about the Hamburg lists and even though the Kopittkes indexed these decades ago, I don’t think I have actually ever heard a talk about the lists. The lists are  available through Ancestry and the indexes on Findmypast and My Heritage. Eric also talked about Germans and immigration in general as well as the German settlements in South Australia and Queensland. My Norwegians came via Hamburg so I had a personal interest too. I liked Eric’s use of maps to help put things into context and I really must update the maps side of my own family history as we have access to digital maps and Google Earth now. There was a handout. 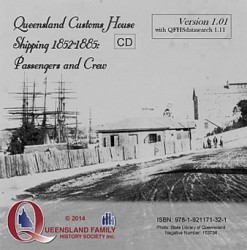 The last speaker of the day was Rosemary Kopittke on the Queensland Customs House Shipping Records 1852-1885 a new index publication by the Queensland Family History Society. Back in the 1980s I was working at Queensland State Archives (QSA) when they got a very poor microfilm copy of these passenger lists from the Brisbane office of the National Archives of Australia. The QSA volunteers had a hard time indexing them into what became known as Z31, Z32 and Z33 and the index cards were interfiled into the overall immigration card catalogue.

It is really good that this has been reindexed from original copies as the collection has 485 voyages and over 90 of them are not held in the main series of passenger lists held by QSA. Also some QSA’s lists were rewritten after being flood damaged in 1893 and some are only partial lists so the Custom House lists are more accurate. There may even be additional information on the Custom House lists. This project has had the benefit of being able to check the lists against those held at QSA, Findmypast and Ancestry and I found Rosemary’s examples of discrepancies interesting because it can make the difference between us finding someone and not finding them.

I bought the CD as it has a copy of the 1865 voyage of the Sunda which is not held anywhere else. While Rosemary was talking I noticed there is also a list for the 1864 voyage of the Legion of Honour so I must look that up too in case there is additional information.The best thing about the presentation was that I learnt how to search the CD better and in ways which I hadn’t even considered because I was mainly after the Sunda and knew the year. There was a handout.

A quick comment about handouts which seem to be making a comeback. I remember when people used to say we should not be ‘cutting down trees’ for handouts but it really is useful as you have key information to take home. However I also find them a bit distracting as I am trying to check if a piece of information is on the handout or whether I should write it down. Quite often speakers say things that are not on the handouts and those that don’t make any notes (because of the handout) might be trying to recall something that is not on it. For these reasons I always put my slides online so that people can go back and have a better look at the talk and websites mentioned although the commentary is missing.

So for me it was a good day because I learnt new things that I could apply to my own family history research even though I have been doing it since 1977. There are so many more online resources and different ways to approach your research that I really do believe that you can learn something from every speaker that you can then apply to your own research. It might not be something direct but a suggestion to follow up from your own research perspective.

The seminar was very reasonably priced for four talks, lots of parking and even easy to get to from Bribie Island although it was just over an hour’s drive. Years ago I used to say you can learn more over a cup of tea and that is still true. Not everything is online and getting out and about with other family historians will help you more than staying home with your laptop.